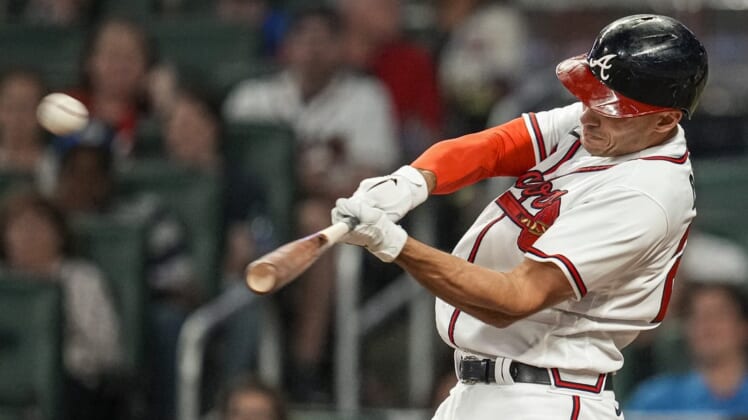 The Philadelphia Phillies and the host Atlanta Braves may be close to finding some offensive answers to their early season struggles.

They will meet in the third game of their four-game series on Wednesday night in Atlanta. They have split the first two games, with the Braves walking off with a 6-5 win on Tuesday night.

“Sometimes it reminds me of some of my old teammates,” Philadelphia manager Joe Girardi said. “They talked about how they’d sit up in bed at night and scream, and then lay down and go back to bed. Hitting is a nightmare. It really is. It’s a battle. It’s a fight. Sometimes you’re going good, sometimes you’re not. You don’t understand why because you feel the same.”

Said Atlanta manager Brian Snitker: “It’s a crazy thing when you’re trying and searching to get it going.”

Philadelphia’s Bryce Harper, limited to serving as the designated hitter because of a sore elbow, appears to be returning to form. He was 3-for-5 with his 10th home run of the season, a 438-foot shot that gave the Phillies the lead in the ninth inning. Harper drove in four runs, giving him 31 for the year.

Atlanta has been changing the lineup to get catcher William Contreras more at-bats, trying him in left field on Monday and at DH on Tuesday. Contreras responded with the game-winning hit Tuesday when the Braves rallied for two runs in the bottom of the ninth. He has 10 RBIs in 12 games.

“That feeling is irreplaceable,” Atlanta first baseman Matt Olson said. “It’s something that could be a real spark. You know that’s got to be your thought as a team in general and especially with the lineup and people we’ve have.”

Austin Riley had his second straight two-hit game and lifted his batting average to .238.

Morton has been outstanding in his last three starts, going 2-0 with a 2.20 ERA. In his last start against the Miami Marlins on Friday, he gave up three runs on seven hits, one walk and had five strikeouts in 5 1/3 innings.

Morton is 5-5 with a 4.53 ERA in 12 career starts against Philadelphia. He beat the Phillies 2-1 last Sept. 28 when he threw seven scoreless innings with 10 strikeouts.

Suarez had an abbreviated start in his last outing Friday against the Los Angeles Dodgers. He was pulled after throwing 84 pitches — only 48 for strikes — in three innings, allowing three runs on five hits, two walks and striking out five. That broke a two-game winning streak that saw him allow only three runs over 13 innings.

This will be the second career start against the Braves for Suarez, who has made 10 total appearances. He faced Atlanta four times in relief last year and did not give up a run in 6 1/3 innings, with seven strikeouts.