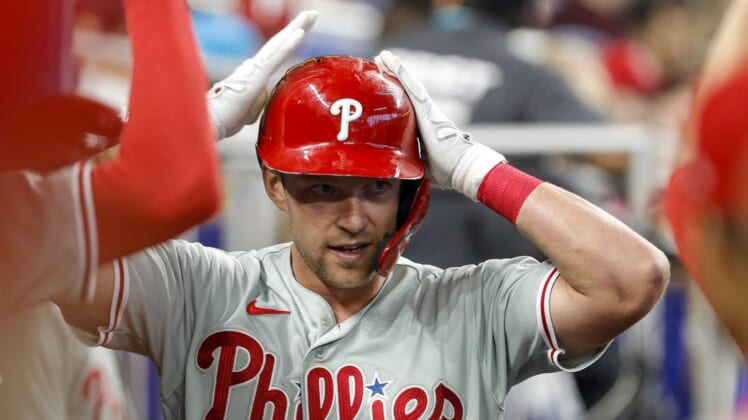 Meyer (0-1), who made his major league debut, allowed seven hits, one walk and five runs in 5 1/3 innings. Meyer, the third overall pick in the 2020 MLB Draft, struck out five batters as his parents and other family members and friends watched from the stands.

Both homers were measured at 424 feet to center field. Realmuto slugged a two-run homer in the fourth, and Hoskins blasted a solo shot in the sixth. Hoskins was removed from the game in the eighth inning due to a strained right knee.

Realmuto has had a standout series so far against his former team, batting 5-for-8 with a homer, two doubles and three RBIs in two games.

Didi Gregorius and Kyle Schwarber homered off Miami’s bullpen. Gregorius finished the day 2-for-4 with a game-high four RBIs. Schwarber leads the National League with 29 homers.

Ranger Suarez (7-5), who hadn’t pitched since June 29, earned the win, allowing four hits and no walks in five innings. He struck out four.

Philadelphia opened the scoring in the fourth as Darick Hall singled and Realmuto feasted on a 0-1 fastball.

Hoskins led off the sixth by homering on a 1-1 slider. The Phillies’ inning continued as Nick Castellanos walked, and Realmuto doubled, ending Meyer’s day.

Reliever Richard Bleier entered, striking out Bryson Stott. Bleier then intentionally walked Alec Bohm, but the strategy backfired as Gregorius lined a two-run single to center to give the Phillies a 5-0 lead.

The Phillies scored five runs in the eighth off of reliever Cody Poteet. The scoring run started with doubles by Hall and Stott (RBI). Bohm followed with a run-scoring single, and Gregorius pulled a two-run homer to right to make it 9-0.

It was the first homer of the year for Gregorius, who hit 72 dingers during three years of his prime with the New York Yankees (2016-2018).

Schwarber capped the seven-hit eighth inning with a solo homer.