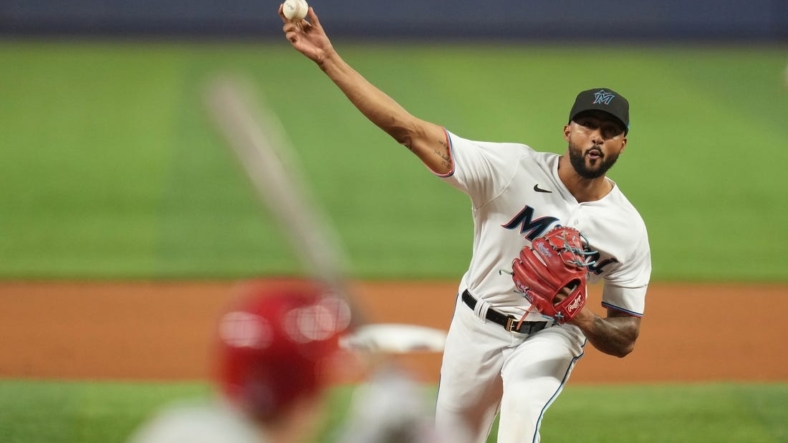 Nick Maton slugged a go-ahead two-run homer in the seventh inning, leading the Philadelphia Phillies to a 2-1 win over the host Miami Marlins on Tuesday night.

Miami (58-84) was led by National League Cy Young Award frontrunner Sandy Alcantara, who was pitching a shutout until Maton pulled a 99-mph fastball over the wall in right.

Alcantara (12-8) went seven innings, allowing eight hits, one walk and two runs. He has now pitched over 200 innings for the second straight season.

Jose Alvarado, Seranthony Dominguez and David Robertson each pitched a scoreless inning of relief. Robertson worked a 1-2-3 ninth for his 20th save.

Third baseman Jordan Groshans, 22, made his major league debut for the Marlins and went 0-for-3.

Philadelphia threatened in the third as Brandon Marsh banged a one-out single off the wall, stole second and went to third on catcher Jacob Stallings’ throwing error.

However, Alcantara got Kyle Schwarber to pop out and Rhys Hoskins to strike out on a 100-mph fastball to escape the jam.

Philadelphia loaded the bases with two outs in the fourth, but Alcantara got Maton on a soft comebacker to end the inning.

De La Cruz put the Marlins on top 1-0 in the fifth when he crushed a high fastball, pulling the ball 370 feet inside the left field foul pole.

Philadelphia took a 2-1 lead in the seventh. Jean Segura blooped a one-out single to right, and Maton followed with his fifth homer of the season. Maton ripped an 0-2 pitch that was up in the zone and tailing back toward the middle of the plate.

Miami nearly tied the score in the ninth, but Brian Anderson’s long drive to center was caught near the wall by Marsh.