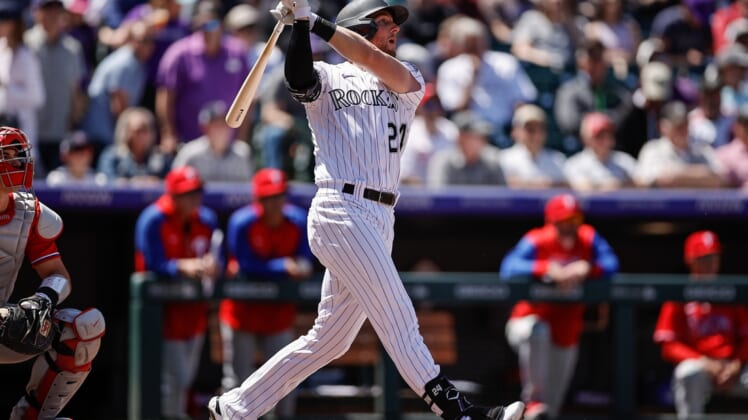 Johan Camargo homered among his four hits, Nick Castellanos had three hits and a home run, and the Philadelphia Phillies beat the Colorado Rockies 9-6 in Denver on Wednesday.

Brad Hand (1-0) got one out and Corey Knebel worked the ninth for his second save.

The Rockies took the lead in the first when Grichuk and Kris Bryant reached on singles and came home on McMahon’s two-run double off starter Zach Eflin.

The Phillies answered in the fourth. Castellanos led off with his third home run of the season, one out later Schwarber walked and Bohm followed with his first of the year to make it 3-2.

The Rockies went back in front in the fifth when Nunez doubled, moved to third on Charlie Blackmon’s single and scored Grichuk’s sacrifice fly. Blackmon scored on Cron’s singles to make it 4-3.

Schwarber tied it in the sixth with his fourth homer and second in two days, a shot into the third deck in right, off starter German Marquez.

Philadelphia blew it open in the seventh against the Colorado bullpen. Jhoulys Chacin (2-1) walked Rhys Hoskins to lead off the inning and Bryce Harper and Castellanos each singled to load the bases.

Lucas Gilbreath relieved Chacin after he fanned J.T. Realmuto but couldn’t stem the rally. Schwarber brought home the first run when he was grazed by a pitch, Bohm drove in another run with a sacrifice fly and Camargo hit a three-run homer to left to make it 9-4.

It was his first of the season.

The Rockies got two back in their half of the inning when Grichuk singled and Cron and McMahon doubled.