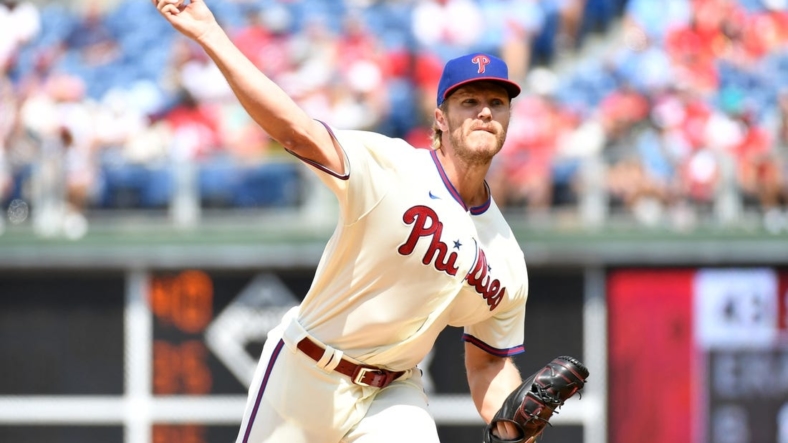 The Philadelphia Phillies continue a 22-game stretch against teams with losing records when they open a three-game series against the Arizona Diamondbacks on Monday night at Phoenix.

The Phillies opened the stretch with six straight victories before falling 5-0 to the Pittsburgh Pirates on Sunday.

Philadelphia began the friendly portion of the schedule by sweeping four home games against the Cincinnati Reds and going 2-1 against the Pirates.

Now the club is embarking on a six-game road trip. The Phillies visit the San Francisco Giants for three games following the series against the Diamondbacks.

“We take away the positive of the winning homestand,” Kyle Schwarber said after Sunday’s loss. “We’ve got to take that momentum into Arizona, get three there and get a little breather and go on from there.”

The Phillies are in second place in the National League wild-card derby as they arrive in the desert. They have been playing well against all types of opponents as Sunday’s loss was just their ninth in the past 31 games.

The hot stretch provides hope the team can crash the postseason field for the first time since 2011.

“We’re a better ballclub than we have been in the past,” Philadelphia interim manager Rob Thomson said. “We’ve just got better talent, that’s part of it.”

Arizona is also playing solid baseball as it shoots to match its season high of four straight wins.

The Diamondbacks are fresh off a three-game road sweep of the Chicago White Sox. Arizona outscored Chicago 20-9 in the series.

“It’s nice to go on the road and win some games and gain some momentum here for this home stretch,” Arizona’s Jake McCarthy said. “We’ve got about a month left, so we’re trying to finish strong.”

McCarthy delivered the tiebreaking double in the top of the ninth inning of Sunday’s 3-2 victory. He went 4-for-5 with three runs and two stolen bases one night earlier when the Diamondbacks notched a 10-5 win.

Arizona is expected to recall its top prospect, outfielder Corbin Carroll, prior to Monday’s game. The first-round pick in 2019 batted .313 with 16 homers in 58 games at Double-A Amarillo earlier this season before getting promoted to Triple-A Reno, where he hit .287 with seven blasts in 33 games.

Carroll, who recently turned 22, won’t be seated in the dugout too often as general manager Mike Hazen recently said he would play every day once he is recalled.

The Diamondbacks will start left-hander Madison Bumgarner (6-13, 4.53 ERA) in the opener.

Bumgarner, 33, lost to the Phillies on June 11 when he gave up three runs (one earned) and six hits over five innings. He is 6-5 with a 3.16 ERA in 14 career starts against Philadelphia.

Bryce Harper (6-for-26) has smacked two homers off Bumgarner. Schwarber is just 2-for-15 with six strikeouts.

The Phillies are countering with left-hander Ranger Suarez (8-5, 3.38), who has three straight no-decisions since beating the Washington Nationals on Aug. 6.

Suarez lost to Arizona on June 12 when he gave up four runs (two earned) and four hits over 4 1/3 innings. The 27-year-old is 1-3 with a 5.95 ERA in six career appearances (three starts) against the Diamondbacks.

Ketel Marte and Christian Walker are each 4-for-10 against Suarez.