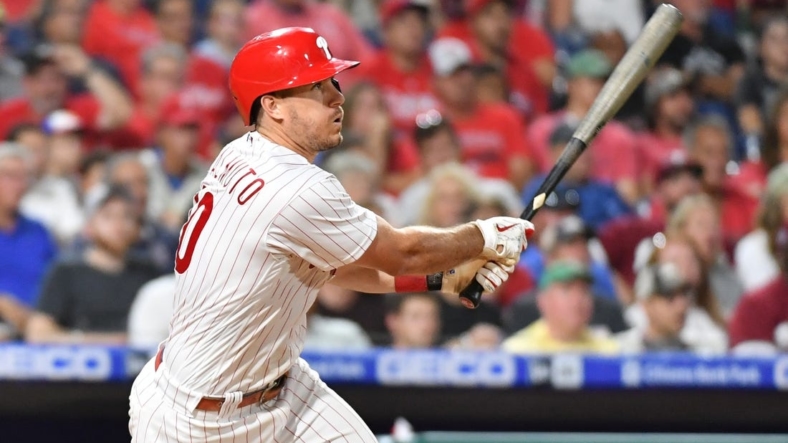 The Philadelphia Phillies are scoring runs early and often during their six-game winning streak, while the Pittsburgh Pirates haven’t been shy about giving them up during their seven-game skid.

The Phillies hope for more of the same on both counts Sunday afternoon when they bid to complete a seven-game season sweep of the visiting Pirates.

“This group is gelling at the right time,” Realmuto said of his club, which has erupted for 35 runs during its six-game winning streak.

“It’s easy to get lackadaisical or complacent when you’re playing these teams,” Gibson said, per NBC Sports Philadelphia. “Especially lately, we’ve done a great job of coming out against these teams and getting the lead early and really setting the tone to the game.”

Pittsburgh manager Derek Shelton knows that all too well after seeing his team allow 54 runs during its seven-game losing skid.

“They’ve jumped on us early,” Shelton said. “Our bullpen did a nice job again (Saturday) — they did a nice job (on Friday) night — it’s just that we gave up too many runs early.”

Right-hander Noah Syndergaard (8-8, 3.77 ERA) will look to follow Gibson’s lead on Sunday afternoon when he makes his fifth start with the Phillies since being acquired from the Los Angeles Angels.

Syndergaard, 29, improved to 3-0 with a 3.60 ERA with his new team after allowing one run on three hits in seven innings of a 4-1 victory over the Cincinnati Reds on Monday.

“My time here so far has been amazing,” Syndergaard said. “I feel like I’m on cloud nine.”

Syndergaard owns a 2-1 record with a 1.65 ERA and 0.88 WHIP in four career starts against Pittsburgh.

The Pirates will counter with right-hander Roansy Contreras (3-4, 3.86), who lost his second straight start on Monday despite allowing two runs on four hits in seven innings of a 2-1 setback to the Atlanta Braves.

Contreras, 22, ventured past the sixth inning for the first time in 12 major league starts.

He has yet to face the Phillies in his career.

Pittsburgh could benefit from another long outing from Contreras, especially after Chase De Jong worked three scoreless innings in relief of starter Tyler Beede on Saturday night. De Jong likely will not be available to pitch in the series finale.

“He’s been huge,” Shelton said of De Jong. “Every time he’s come in the game, he’s kept us in the game. Another nice outing by Chase — he’s continued to throw the ball about as well as anybody we have.”