Aaron Nola of the Philadelphia Phillies tied Tom Seaver’s record for most consecutive strikeouts Friday afternoon, when the ace right-hander struck out 10 straight batters against the New York Mets — the team for whom Seaver set the mark in 1970.

Nola, starting game one of a doubleheader, began his outing in inauspicious fashion by hitting leadoff batter Jeff McNeil and surrendering a double to Francisco Lindor. But the 28-year-old wriggled out of the jam and began his pursuit of history by striking out Michael Conforto, Pete Alonso and Dominic Smith.

Nola, throwing a curveball, changeup and fastball as the shadows descended upon home plate at Citi Field, then whiffed James McCann, Kevin Pillar and Luis Guillorme on 14 pitches in the second.

Opposing pitcher Taijuan Walker — whom Nola doubled off for the Phillies’ first hit in the top of the third — worked the count full in the bottom half before striking out. Nola then struck out McNeil and Lindor to establish a new Philadelphia record for most consecutive strikeouts. Steve Carlton (1981), Curt Schilling (1996) and Jerad Eickhoff (2018) each struck out seven straight batters. 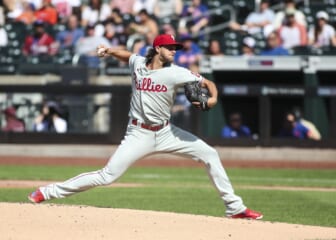 Conforto struck out on a 2-2 pitch leading off the fourth for the record-tying strikeout. The ball was tossed into the Phillies dugout for preservation.

Nola moved within a strike of breaking the record before Alonso doubled just fair down the first base line as the crowd of Citi Field erupted. Alonso moved to third when Smith grounded to second for the Mets’ first non-strikeout out before Nola struck out McCann.

In a decidedly modern moment, Nola was checked for foreign substances as he exited the mound following the fourth inning.

Nola later hit a run-scoring double in the fifth to give Philadelphia a 1-0 lead.

Seaver struck out 10 straight San Diego Padres to end a 2-1 victory at Shea Stadium — which was across the street from Citi Field — on Apr. 22, 1970. He finished with 19 strikeouts, which tied the then-modern record held by Carlton.