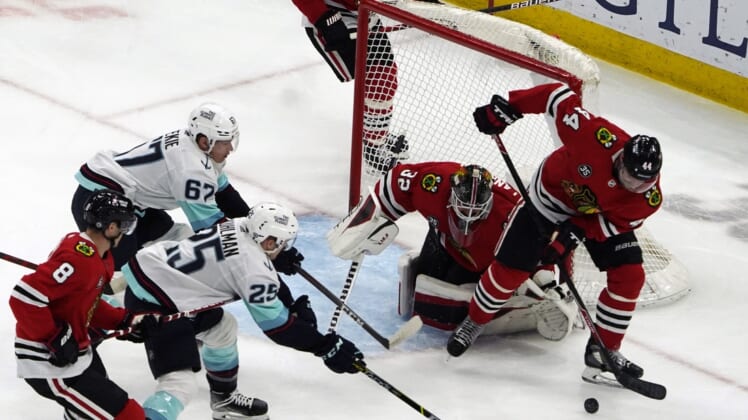 Philipp Grubauer made 29 saves for his second shutout of the season and the 20th of his NHL career as the expansion Seattle Kraken defeated the host Chicago Blackhawks 2-0 Thursday night.

Alex Wennberg and Jordan Eberle scored for Seattle (23-42-6, 52 points), which split its two-game trip after a 4-1 loss the previous day in St. Louis.

It was scoreless after the first period despite Seattle outshooting the Blackhawks 17-3.

The Kraken opened the scoring 47 seconds into the second period. After a turnover in the neutral zone, Jordan Eberle sent a pass toward Wennberg that went off the stick of a Chicago defenseman and Ryan Donato skate. Wennberg picked up the puck in the middle of the ice at the Blackhawks’ blue line, skated around Jake McCabe and faked a backhander before pulling the puck back to his forehand and stuffing the puck past Lankinen at the left post.

It remained 1-0 through the end of the period, thanks to the Kraken’s penalty killers.

Donato was called for interference at 16:01 of the period on Chicago’s Taylor Raddysh. On the ensuing faceoff, defenseman Carson Soucy’s stick came up while battling Raddysh and cut him in the face, resulting in a double minor for high-sticking at 16:05.

Seattle killed off all 1:56 of the five-on-three opportunity and all but the final five seconds of Soucy’s penalty before the period ended.

Wennberg also made a poke check on Chicago’s Kirby Dach to prevent a short-handed breakaway early in the third.

Eberle clinched the victory, scoring on a wrist shot from the top of the left faceoff circle at 18:21 of the third.