Philadelphia Phillies right-hander Zach Eflin was scratched from his start against the Arizona Diamondbacks on Thursday, hours after being activated from the injured list.

Matt Moore will start instead for the Phillies. No reason was initially given for the move.

Eflin was on the IL with tendinitis in his right knee. It was to be his first start since July 16. He is coming off a rehab start Saturday at Double-A Reading. 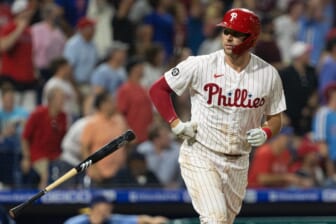