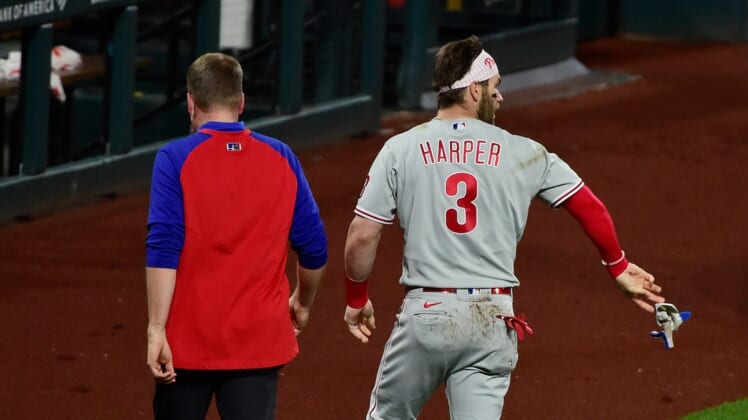 Apr 28, 2021; St. Louis, Missouri, USA; Philadelphia Phillies right fielder Bryce Harper (3) tosses his batting gloves on the field as he walks off with a trainer after he was hit by a pitch from St. Louis Cardinals relief pitcher Genesis Cabrera (not pictured) during the sixth inning at Busch Stadium. Mandatory Credit: Jeff Curry-USA TODAY Sports

Philadelphia Phillies outfielder Bryce Harper will sit out Friday’s home game against the New York Mets because of a sore left wrist, the team announced.

This will be the second straight game Harper has missed since being hit in the face Wednesday night by a 97-mph pitch by St. Louis Cardinals reliever Genesis Cabrera.

Catcher J.T. Realmuto was scratched from Friday’s starting lineup, with no reason immediately provided. Realmuto is batting .329 with two homers and 11 RBIs in 25 games.

Gregorius was hit in the ribs by a Cabrera pitch on Wednesday and sat out Thursday. He is batting .250 with two homers and 14 RBIs in 21 games.

Marchan went 4-for-8 (.500) with a homer and three RBIs in three games for the Phillies earlier this season.