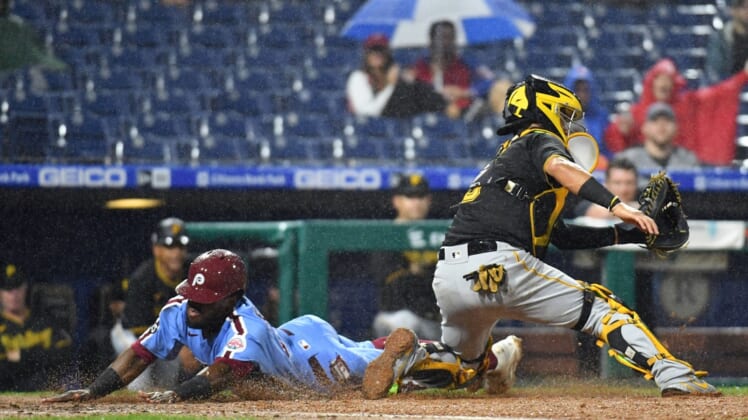 Ronald Torreyes smacked a go-ahead, pinch-hit, three-run homer, J.T. Realmuto homered and knocked in four runs off the bench and the host Philadelphia Phillies rallied from a six-run deficit for a 12-6 victory over the Pittsburgh Pirates on Thursday.

Didi Gregorius hit a solo home run and Odubel Herrera had three hits for the Phillies, who won their third in a row and moved within two games of the Atlanta Braves for first place in the National League East.

Bryce Harper walked three times for the Phillies, who improved to 79-74 while coming back from six runs down to win for the fourth time this season, most in the majors.

Phillies starter Aaron Nola (9-8) earned the win despite giving up six hits and six runs with eight strikeouts and one walk in six innings.

Ke’Bryan Hayes homered and drove in three runs and Colin Moran added a home run, single and an RBI for the Pirates (57-95).

The Pirates went ahead 2-0 in the second inning when Overton blooped a bases-loaded, two-run single to left in his first career major league plate appearance. Hayes followed with a three-run homer to right for a 5-0 advantage.

Moran ripped a solo homer to lead off the third for a 6-0 lead.

The Phillies closed within 6-1 in the bottom of the third when Gregorius slammed a 438-foot homer to right to lead off the frame. Nola later worked a walk and eventually scored on a passed ball, Jean Segura added a sacrifice fly and Andrew McCutchen hit an RBI double to cut the deficit to 6-4. When Brad Miller contributed an RBI single, the Phillies trailed by one run, 6-5, after three innings.

In the sixth, the Phillies rallied for three more runs and an 8-6 lead when Torreyes provided a pinch-hit home run with two on and two out.

Realmuto added a two-run homer in the seventh for a 10-6 advantage. He then added a two-run single in the eighth for a 12-6 lead as the Phillies’ regular starter at catcher went 3-for-3 as a reserve.