Philadelphia Phillies get off to fast start in rout of the St. Louis Cardinals 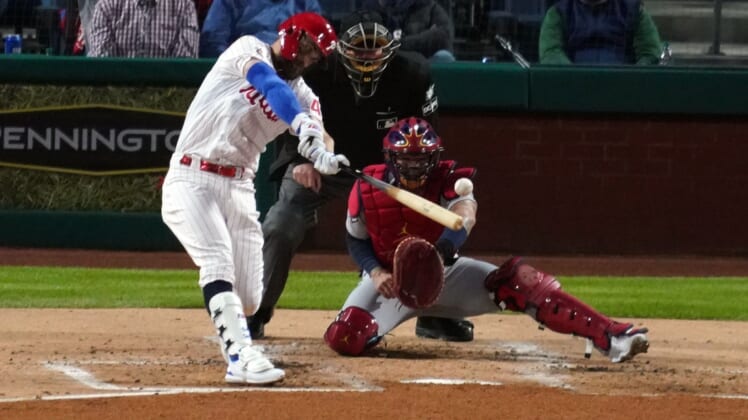 Zach Eflin tossed seven-plus solid innings, J.T. Realmuto homered and drove in two runs and the host Philadelphia Phillies scored six times in the second inning on their way to a 9-2 win over the St. Louis Cardinals on Friday.

The Phillies have won six of seven at home.

Eflin (1-0) allowed six hits and two runs, struck out six and walked none while throwing 104 pitches, 73 for strikes. He retired 12 batters in a row during one stretch.

It was the Cardinals’ first game at Philadelphia since a three-game series May 28-30 of 2019.

The Phillies took a 1-0 lead in the second inning when Segura doubled to center, scoring Alec Bohm. Cardinals center fielder Dylan Carlson appeared to lose the ball in the lights. Eflin was hit by a pitch with the bases loaded and McCutchen snapped an 0-for-14 slump with a two-run single for a 4-0 advantage.

Harper, the ninth of 12 Phillies to bat in the inning, added a two-run double to right-center for a 6-0 lead.

The Cardinals managed only four singles through the first six innings, two by Edman and one each by Paul DeJong and Paul Goldschmidt. In the sixth, Nolan Arenado struck out swinging with runners on first and second to end the inning.

Realmuto’s two-run home run to left in the seventh extended Philadelphia’s lead to 8-0.

Williams’ two-run homer in the eighth closed the Cardinals within 8-2.

In the eighth, McCutchen added an RBI single for a 9-2 lead.