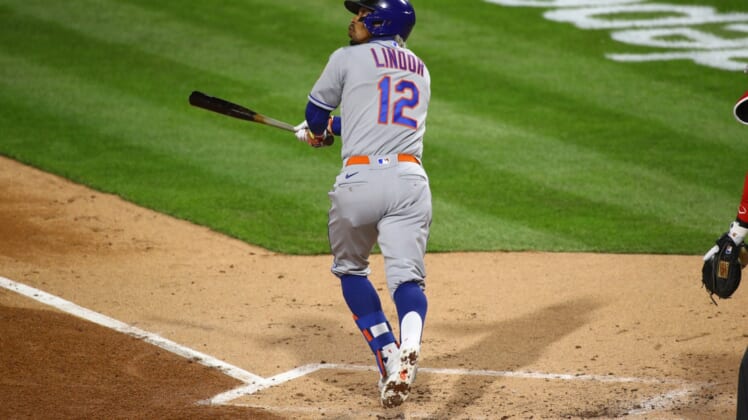 Bryce Harper scored the tie-breaking run on an error during a five-run eighth inning Monday night, and the host Philadelphia Phillies overcame a dominant outing by New York Mets starter Jacob deGrom and remained perfect with a 5-3 win.

The Phillies are 4-0 for the second time in three years. The Mets, whose season-opening series against Washington was postponed due to the Nationals’ coronavirus outbreak, fell to 39-21 all-time on Opening Day — still the best Opening Day winning percentage of any team.

deGrom helped stake the Mets to a 2-0 lead with his bat as well as his arm. The ace right-hander, who won the National League Cy Young in 2018 and 2019 before finishing third last season, was regularly clocked at 100 mph as he allowed three hits and two walks while striking out seven over six innings.

At the plate, he recorded the team’s first hit of the season when he beat out an infield single in the third and added an RBI single to cap a two-run fourth inning.

But after Miguel Castro threw a one-hit seventh, Trevor May (0-1) and Aaron Loup combined to squander the lead, marking the 31st time deGrom has seen a lead blown by the bullpen.

In the eighth inning, Brad Miller delivered a one-out pinch-hit single for winning pitcher Connor Brogdon (2-0), and Andrew McCutchen worked an eight-pitch walk. Rhys Hoskins followed with a single to load the bases before Loup entered and plunked Harper with his second pitch to force home Miller.

J.T. Realmuto delivered an RBI single on the next pitch, and then Alec Bohm also swung at the first pitch and delivered a grounder to third base. Luis Guillorme, inserted for J.D. Davis prior to the inning, threw home, but the ball glanced off the glove of James McCann as Harper and Hoskins raced home. Didi Gregorius followed with a sacrifice fly.

The Mets nearly came back in the ninth against Jose Alvarado, who allowed a run on three two-out hits, including an RBI single by Michael Conforto, before he closed out his first save by getting potential go-ahead run Pete Alonso to fly out to the wall in right.

Phillies starter Matt Moore, pitching in the majors for the first time since April 6, 2019, allowed two runs on four hits and four walks while striking out four over 3 1/3 innings.

McCann had an RBI single in the fourth for the Mets.