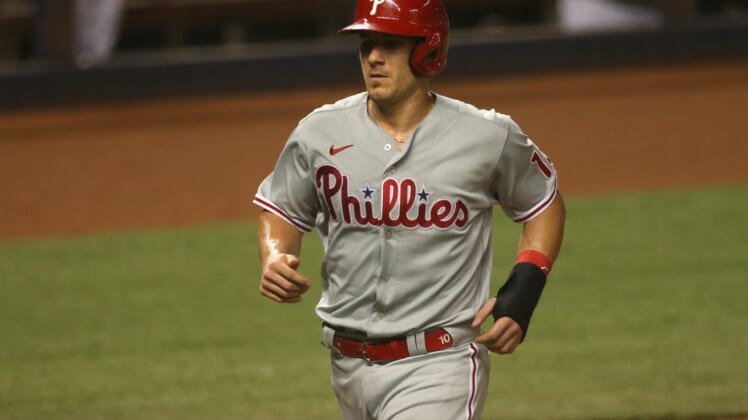 Philadelphia Phillies catcher J.T. Realmuto, fresh off signing a $115.5 million extension, has a small fracture in his right thumb and is expected to miss a month, manager Joe Girardi said Thursday.

Girardi said the thumb on Realmuto’s throwing hand will be immobilized for two weeks and then re-evaluated. The team — and Realmuto — is hopeful the 29-year-old will be ready for Opening Day.

“I’m confident I’ll be back for Opening Day, but we’re not going to rush it,” Realmuto told reporters. “I was pretty shook when it happened.”

Girardi said the thumb was injured six days ago while Realmuto was catching a bullpen session. Realmuto said he’s had some trouble throwing, not hitting.

Realmuto signed a five-year contract extension on Jan. 29 to remain with the Phillies through the 2025 season.

Realmuto, 29, was traded to the Phillies before the 2019 season by the Miami Marlins. He signed a one-year, $10 million extension with the team before the 2020 season.