Johnson underwent ankle surgery in December after saying in November that his ankle had “collapsed.” He also missed time in 2020 with a knee injury.

“Full go in practice. I got cleared a couple weeks ago,” Johnson told reporters. “Now that I have two legs, I’ll be a different animal this year.”

The Eagles were injury-ravaged on their offensive line last season, a big reason for the team’s 4-11-1 record. The Eagles expect to have right guard Brandon Brooks (Achilles) and left tackle Andre Dillard (torn biceps) back as well.

“Last year was an embarrassment for everyone involved and that’s been sitting and marinating with us,” Johnson, 31, said.

Johnson, a 2017 first-team All-Pro, played in just 19 games the past two seasons. He has started all 99 games in which he has played since being selected by Philadelphia with the fourth overall pick of the 2013 NFL Draft. 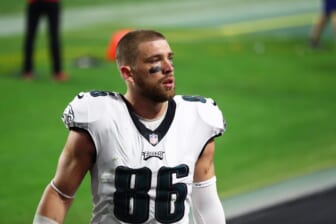