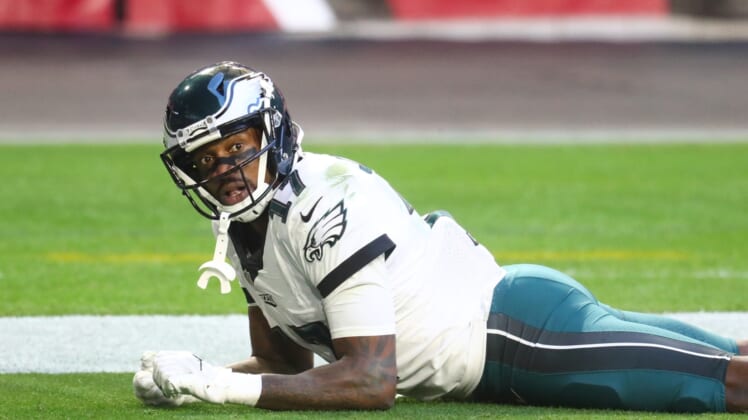 The news comes nearly one month after the team also released veteran wideout DeSean Jackson, and two days after news that safety Jalen Mills would be departing as a free agent with the New England Patriots.

The release of Jeffery knocked off the final year of the 31-year-old’s four-year, $52 million extension he signed in 2017.

Hampered by offseason foot surgery, Jeffery caught just six passes for 115 yards and one touchdown in seven games as the Eagles went 4-11-1 and missed the playoffs for the first time since 2016.

In 46 games over four seasons with the Eagles, including a Super Bowl title to conclude the 2017 campaign, Jeffery had 171 receptions for 2,237 yards and 20 TDs. He had 12 receptions three touchdown catches in the 2017 playoffs, with a scoring reception in the team’s Super Bowl win that year.

Jeffery, who played his first five seasons with the Chicago Bears, has 475 career receptions over 109 games for 6,786 yards and 46 TDs.

Jackson, also 31, leaves Philadelphia after signing a three-year, $30 million contract before the 2019 season. He played just 16 of 32 games over the past two seasons, missing all but one game in his first campaign after suffering a season-ending foot injury in the season opener. Last season he started in six of his 15 games, but recorded just 2 1/2 sacks.