Playing 11 seasons with the Philadelphia Eagles, Pro Bowl center Jason Kelce knows a thing or two about the local fans in Philly and how they’ve handled the inconsistent Ben Simmons. In that time, Kelce has seen it all, from experiencing a 4-12 record in 2012 to winning a Super Bowl in the 2017 season. Kelce knows first-hand the kind of vitriol the Philadelphia 76ers star has received but suggests a simple solution for the All-Star.

“I tell guys, you write your own narrative. I don’t want to crush any other players, but what’s going on with the 76ers, Ben Simmons, stuff like that, all of that is because of a lack of accountability, a lack of owning up to mistakes and a lack of correcting things,” Kelce said. “If all that got corrected, if you’re fixing free throws, if you’re getting better as a player, none of this is happening. So everybody can bitch and complain about how tough this city is to play in. Just play better, man. This city will love you.”

Well then. Hear that Ben Simmons? Just play better, man. That’s all it is.

Really Kelce? Really? Of course Simmons knows he just has to play better. That much is obvious, but Simmons has expressed his feelings. He does not want to play for the Philadelphia 76ers anymore. It’s that simple. 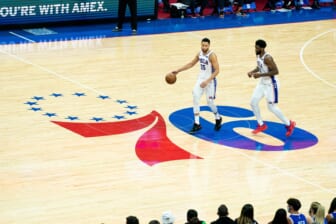 As Kelce correctly pointed out, Ben Simmons should have continued to incrementally improve his shooting ability since entering the league as the first overall pick in 2016. Part of that is on the Sixers organization too.

While Simmons may have been difficult when working and training with the franchise, it’s up to them to maintain that personal relationship and ensure there is chemistry on both sides. That was a big failure on their part.

It also likely hasn’t helped, playing with the brash, but ultra-talented Joel Embiid. Simmons simply needs to be in a new atmosphere at this point, surrounded with positivity and optimism. Right now it feels as though he’s being held captive by an organization that believes in his skills but is unwilling to nurture his needs. Which, at this point is a trade.

To Kelce’s credit, it didn’t sound like he was knocking Simmons specifically in any way. His words seem pretty fair. Especially considering the high expectations surrounding the former phenom coming into the NBA.

But he also wasn’t done criticizing (neither am I). Kelce went on to take a shot at Jacksonville, which seems unfair as they weren’t really in the conversation to begin with. Here’s what he had to say.

“Everybody’s going to get crushed at some point, everybody is going to go through a downturn and be struggling, and at all times this city is going to keep you accountable for doing your job and performing. But if you stick to it and you fight through it and you get better, they’ll respect the hell out of you. Even if you’re struggling and you’re fighting and you’re trying, they’re still going to respect you. That’s what I think most guys miss. I really don’t think this is a hard place to play at all. I think a hard place to play is … I think it would be miserable to play in a place like Jacksonville, where nobody cares.“

Well, that’s not going to earn Kelce any brownie points in Duval the next time the Eagles visit the Jacksonville Jaguars. But then again, their fans don’t really care anyway. He should be all good.

As for Kelce’s comments on Ben Simmons? The three-time All-Star probably doesn’t care about those either.