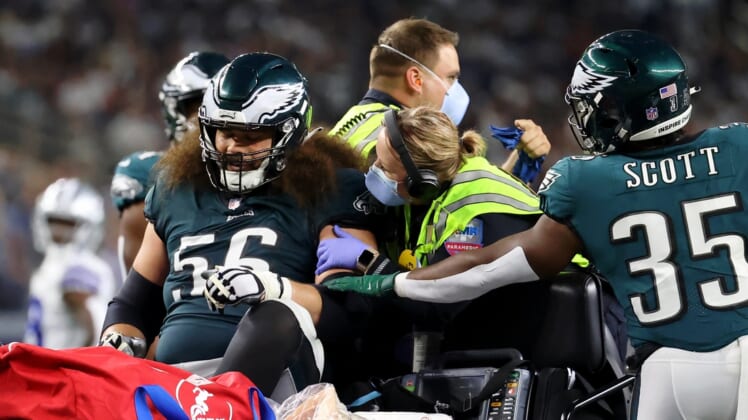 Sep 27, 2021; Arlington, Texas, USA; Philadelphia Eagles offensive guard Isaac Seumalo (56) is consoled by running back Boston Scott (35) as he is taken off the field on a cart after sustaining an apparent injury during the fourth quarter of their game against the Dallas Cowboys at AT&T Stadium. Mandatory Credit: Kevin Jairaj-USA TODAY Sports

Philadelphia Eagles guard Isaac Seumalo is out for the season with a foot injury and safety K’Von Wallace will be put on injured reserve with a separated shoulder.

Seumalo, 27, suffered a Lisfranc injury during Monday night’s loss to the Dallas Cowboys and will have surgery. He was carted off the field in the fourth quarter.

Nate Herbig replaced Seumalo against the Cowboys. The Eagles already were without Brandon Brooks (pec) and left tackle Jordan Mailata (knee) for the game. Brooks is on short-term IR.

Wallace, 24, will miss three to six weeks and be put on short-term IR. Wallace started the past two games and has started five in 18 total games for the Eagles.

Seumalo played in just nine games last season and has played in all 16 games just once, in 2019. He has 43 career starts for the Eagles being selected in the third round of the 2016 draft.