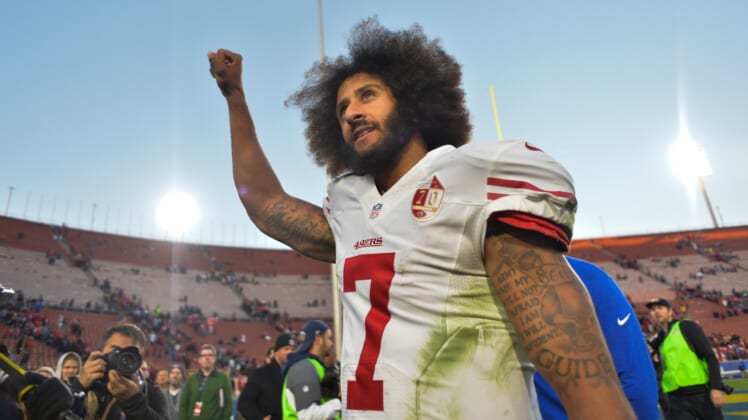 The NFL has shifted its tone concerning Colin Kaepernick to the point where Commissioner Roger Goodell has now encouraged teams to sign him. But which team might be willing to actually follow through? Philadelphia Eagles head coach Doug Pederson isn’t ruling out the idea.

Eagles coach on Kaepernick signing: ‘Not out of the realm of possibility’

On Wednesday morning, Pederson appeared on 94WIP’s Morning Show with Angelo Cataldi. He was asked about potentially signing Kaepernick and did not rule out the possibility.

“I think it’s something that if a team or even us were in a situation, we would look at all possibilities and scenarios,” Pederson said of Kaeperick. “The one thing you have to keep in mind is he hasn’t played in a couple years. That still doesn’t mean he couldn’t come in and be a backup and learn your system and do those things for you. It’s not out of the realm or possibility that could happen.”

The argument about Kaepernick having been out of the league doesn’t necessarily hold water. We’ve seen other backup quarterbacks take significant time away from the NFL only to come back and have no real issues.

Also, while Pederson is giving a diplomatic answer here, it sure seems like the Eagles won’t be signing Kaepernick. And quite honestly, they shouldn’t be the team to do it, having already found their franchise quarterback and his backup, Jalen Hurts.

The NFL sure did pick a tough time to back Kaepernick. In addition to the global pandemic that’s restricted everything sports-related this spring, the NFL’s teams have mostly figured out their quarterback situations heading into the 2020 season. Heck, former NFL MVP Cam Newton is still out of a job, and that’s not likely to change in the immediate future.

So, which teams could be in on Kaepernick this coming season? We recently broke down the best options for the former Super Bowl contender. Let’s just say that the team that seems to be the best fit from a personnel standpoint may not be on board with featuring an outspoken social justice warrior.