Despite not even playing in the game, seats for Ben Simmons’ return as a Philadelphia 76ers opposing player fetched some absurd secondary market tickets prices.

When the 76ers and Brooklyn Nets made their February NBA trade deadline swap of disgruntled superstar guards Simmons and James Harden, observers of the sport immediately circled March 10 on their calendars. The Thursday night game would be the first time Simmons would return to Philly as an opposing player.

And it would be the chance for fans to unleash their hate on the three-time All-Star for deciding to sit out all season and wait to be traded.

Unfortunately, for NBA fans that hoped to see Simmons and Harden play against each other with their new teams, only one-half of that equation delivered. Harden did play and has been competing for his new squad for some time. However, the 25-year-old Simmons is still getting his body into NBA shape and acclimating to his new team and system. Meaning he has yet to suit up for the Nets. And didn’t make an exception for the game against the 76ers.

However, Simmon’s did attend the matchup aside bench spectator and that seemed to be more than enough for fans to pay some wild prices to see their former point guard step back inside Wells Fargo Arena. According to TNT, prices for lower concourse seats to the game were as high as $4,000. While nose bleed seats fetched as much as $200 apiece, just to get the chance to yell at Simmons on the bench from on high. Way high. 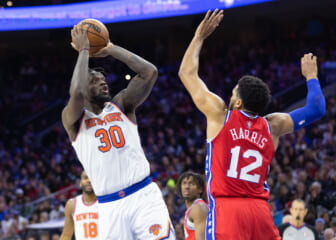 Also Read:
Tobias Harris expected to be traded from 76ers this offseason

In the end, despite not playing, Simmons’ new teammates got the final laugh as the Nets beat their division rivals 129-100. Team leader Kevin Durant led the way with 25 points, 14 rebounds, and seven assists on the night.

The 76ers return Sunday on the NBA games today schedule to battle the Orlando Magic on the road.