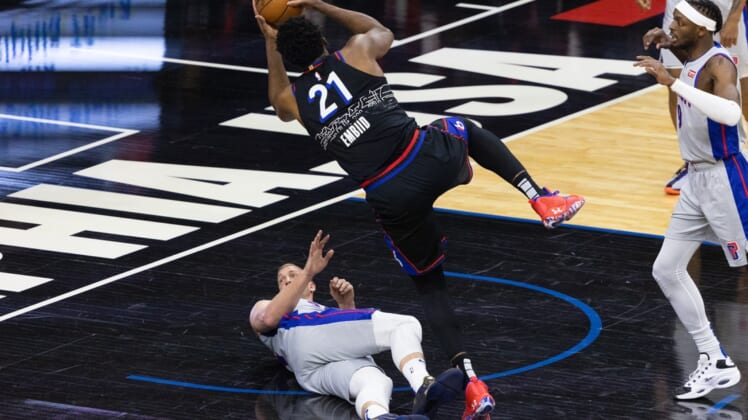 Joel Embiid scored 29 points on 11-of-13 shooting to lift the host Philadelphia 76ers to their season-best eighth consecutive victory, 118-104 over the Detroit Pistons on Saturday.

Tyrese Maxey scored 22 points, Tobias Harris added 18 and Danny Green had 11 for the Sixers (47-21), who moved closer to clinching the top seed for the Eastern Conference playoffs.

Matisse Thybulle tied his career high with five steals for the Sixers, who never trailed in the game despite playing without Ben Simmons (back) and Seth Curry (rest).

The Sixers cruised to a 34-17 lead after the first quarter, but the Pistons didn’t wilt.

Doumbouya hit consecutive baskets and Detroit pulled within 45-37 with 5:29 left in the second.

Philadelphia then surged to a 56-43 lead at halftime thanks in large part to Embiid’s 18 points.

Doumbouya paced the Pistons with 10 first-half points off the bench.

When Bey drove to the basket and dunked with two hands, the Pistons got within 83-71 with 2:21 to go in the third.

George Hill dropped in a 3-pointer on the Sixers’ opening possession of the fourth for a 19-point lead.

Jackson converted a four-point play with 8:05 remaining and the Pistons cut the deficit to 97-85.

However, Embiid and Green keyed a late run and the Sixers moved ahead 106-89 with 4:57 left, basically sealing the win.