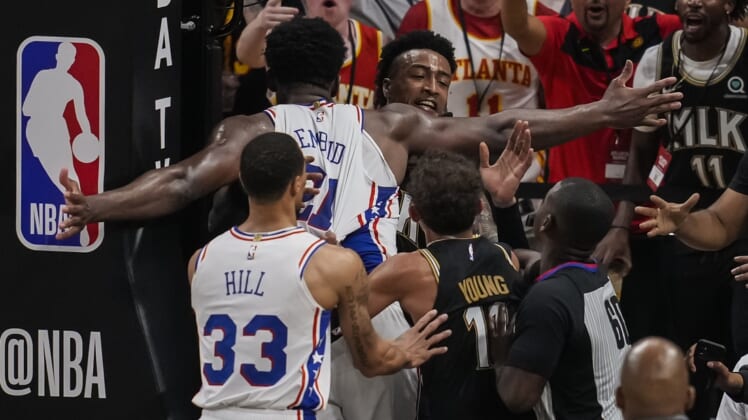 Jun 18, 2021; Atlanta, Georgia, USA; Philadelphia 76ers center Joel Embiid (21) and Atlanta Hawks forward John Collins (20) get involved in a shoving match leading to both receiving technical fouls during the second half during game six in the second round of the 2021 NBA Playoffs. at State Farm Arena. Mandatory Credit: Dale Zanine-USA TODAY Sports

The NBA fined Philadelphia 76ers star Joel Embiid $35,000 for his part in an on-court altercation with Atlanta Hawks forward John Collins in Game 6 of their Eastern Conference semifinals series.

Additionally, Hawks reserve Bruno Fernando was suspended one game without pay for leaving the bench.

The incident occurred with just over four minutes remaining in the fourth quarter of the 76ers’ 104-99 win in Atlanta on Friday night. The league said Embiid was fined because he escalated the incident with Collins in an “unsportsmanlike manner” and failed to comply with an interview with NBA security after the game 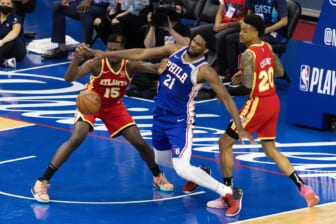 Fernando will serve his suspension Sunday. The 22-year-old has seen limited action in the postseason, playing less than three minutes combined in two of the Hawks’ 11 games, scoring just two points.

The series is tied at 3-3. Game 7 is Sunday night in Philadelphia. 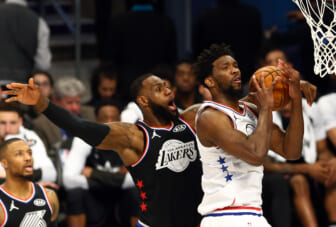