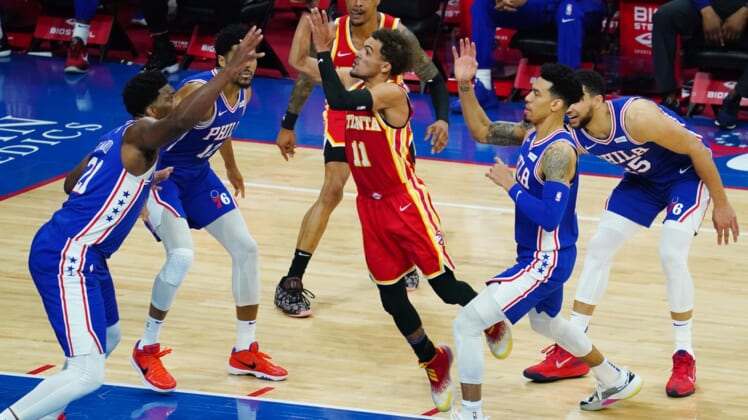 Dwight Howard scored 19 points and grabbed 11 rebounds as the Philadelphia 76ers dominated the visiting Atlanta Hawks for the second straight game, rolling to a 126-104 victory on Friday.

Philadelphia had seven players in double figures, and none of the starters played more than 27 minutes. Howard led the 76ers’ reserves, who totaled 60 points. Shake Milton scored 13, Furkan Korkmaz had 11 and Matisse Thybulle added 10.

The Hawks got leading scorer Trae Young back in the lineup after he missed four games with a sprained left ankle. Young showed no lingering effects and scored 32 points, his 18th game this season with 30-plus.

Danilo Gallinari came off the Atlanta bench to make four 3-pointers and score 16 points. Clint Capela played through left heel pain and had 11 points and 15 rebounds. Onyeka Okongwu finished with 12 points, and John Collins had 11.

Atlanta led 21-8 in the first quarter, but the gap was cut to 26-23 going into the second. The Sixers outscored Atlanta 42-20 in the second period, led by as many as 21 and was ahead 65-46 at the half. Philadelphia shot 53.6 percent in the second quarter, compared to just 27.8 percent for Atlanta.

Philadelphia led by as many as 27 in the third quarter and took a 94-77 lead into the fourth quarter.

The Sixers improved to 25-7 at home and won the season series with the Hawks 2-1.

Atlanta, which plays seven of its final eight games at home, will face the visiting Chicago Bulls on Saturday. Philadelphia begins a three-game road trip on Sunday at San Antonio.