Phil Mickelson: ‘Couldn’t be happier’ with move to LIV Golf 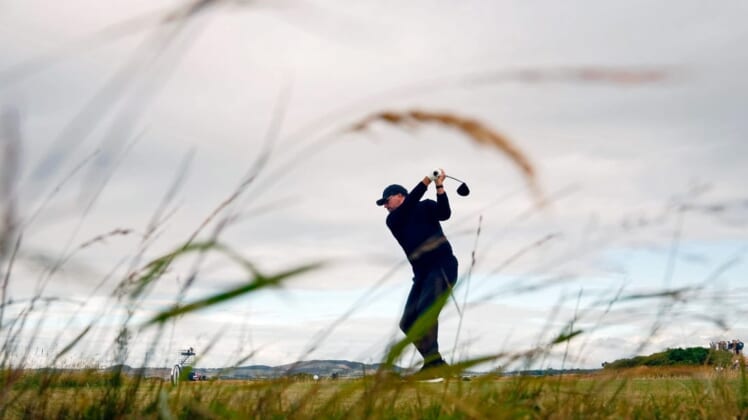 Phil Mickelson said Thursday he “couldn’t be happier” with his move to leave the PGA Tour and join the LIV Golf Invitational Series.

Speaking after shooting an even-par 72 in the first round of The Open Championship at St. Andrews, Mickelson said joining the controversial tour was the proper one — even it meant taking the criticism of his longtime rival, Tiger Woods, and others.

“I made the right decision for me,” Mickelson said. “And I’m excited about, like I say, having the opportunity to play competitive golf and have it in my life in a more moderate scale to where I can do some things outside of that, too.”

While Mickelson hasn’t disclosed how much he’s been paid to play LIV Golf, Bryson DeChambeau said he will earn more than $125 million through the 2026 season. In addition to the money, players have been lured by a less-rigorous tour schedule.

Woods said Tuesday that, in his opinion, those who had left the PGA Tour for the upstart Saudi-financed LIV Golf had done wrong. LIV commissioner Greg Norman told The Washington Post last month that Woods rejected an offer in the “high nine digits” to leave the PGA Tour.

“I think that what they’ve done is they’ve turned their back on what has allowed them to get to this position,” Woods said of the defectors.

The Open is celebrating its 150th anniversary this week and threw a pair of commemorative events earlier this week. Mickelson, who won The Open in 2013 at Muirfield, didn’t attend because of the LIV controversy.

“The R&A contacted me a couple weeks before and said, ‘Look, we don’t think it’s a great idea you go (to the celebrations), but if you want to, you can,'” Mickelson said. “I just didn’t want to make a big deal about it, so I said fine. We both kind of agreed that it would be best if I didn’t.”

Still, Mickelson said he is content with his situation and looking forward to the next LIV Golf event at the end of July at Trump National Golf Club Bedminster in New Jersey.

“I couldn’t be happier. I think it’s been really good,” he said. “I can’t wait to get to New Jersey and play another event there. The player experience, the experience of those events from a player standpoint is a 10. You can’t get it any better. Look, it’s not my job to explain or help you understand or whatever. It’s just, I couldn’t be happier.”