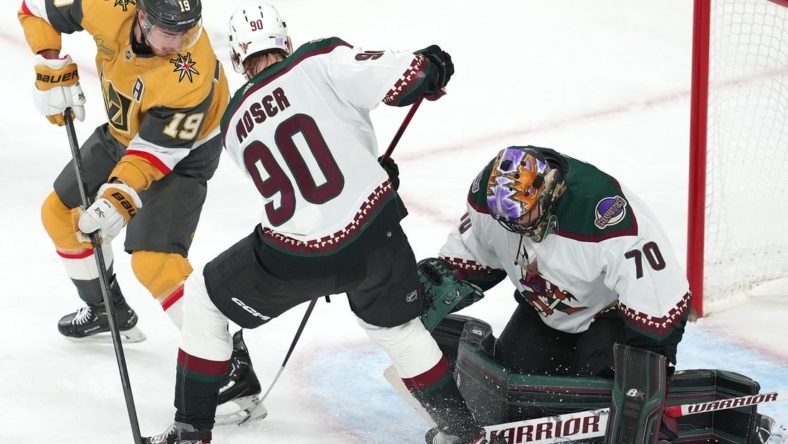 Alex Pietrangelo had a goal and two assists, Logan Thompson stopped 25 of 26 shots and Phil Kessel extended his NHL-record ironman streak to 1,000 games as the Vegas Golden Knights defeated the Arizona Coyotes 4-1 on Thursday night in Las Vegas.

It was the third three-point game of the season for Pietrangelo, while Thompson picked up his ninth victory of the season, second only to Boston’s Linus Ullmark’s 12 wins in the NHL. Kessel, who started the streak on Nov. 3, 2009, as a member of the Toronto Maple Leafs, played 15:44 and had three shots on goals.

Clayton Keller scored a goal and Karel Vejmelka finished with 35 saves for Arizona, which lost its third straight game. It was the sixth game of an NHL record-tying 14-game road trip for the Coyotes, who play 20 of their first 24 games on the road.

Vegas then took a 1-0 lead at the 12:21 mark of the second period on Pietrangelo’s second goal of the season. The score, which came on a one-timer from the right point off a Jack Eichel feed, came while J.J. Moser was in the penalty box for holding.

The Golden Knights extended their lead to 31 seconds into the third period when Carrier powered around Matias Maccelli at the bottom of the right circle and then flipped in a shot into the top corner of the net for his fourth goal of the season.

Vegas made it 3-0 at the 5:53 mark when Stone swatted in a rebound of Pietrangelo shot under the crossbar for his fifth goal of the season.

Keller got Arizona on the board with 8:31 remaining when his crossing pass for Travis Boyd ricocheted off Vegas defenseman Alec Martinez standing in front of the crease and into the net for his seventh goal of the season and fourth in the last five games.

Smith finished the scoring with 1:03 left when he one-timed a Marchessault pass from the low slot for his ninth goal of the season.