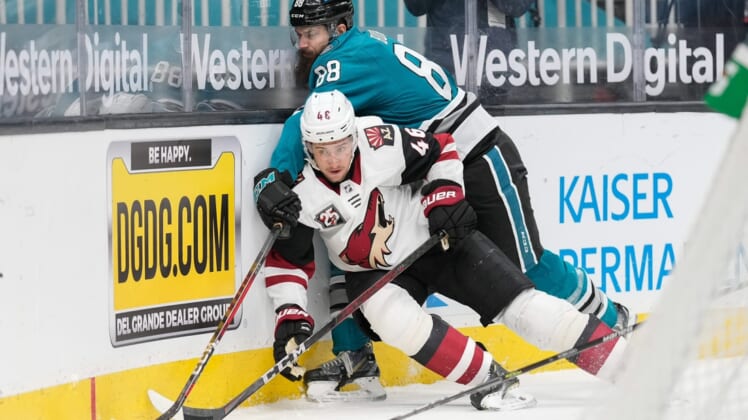 Phil Kessel scored the game-winning goal 2:30 into overtime to lift the Arizona Coyotes over the host San Jose Sharks 5-4.

In a 3-3 game and with the Sharks were outshooting the Coyotes 43-28 late in the third period, Conor Garland powered past Erik Karlsson and Nikolai Knyzhov to beat netminder Alexei Melnichuk, who was making his NHL debut, at the 16:07 mark.

However, Alexander Barabanov buried the tying goal with 49 seconds left in regulation.

Rudolfs Balcers, Kevin Labanc, and Timo Meier all found the back of the net for the Sharks (21-27-7, 49 points.) Melnichuk made 27 saves.

Both teams were playing down one skater in the first period after a scuffle between Arizona’s Jakob Chychrun and San Jose’s Jeffrey Viel. While skating 4-on-4, Dvorak easily skated around multiple Sharks to beat Melnichuk up high and put the Coyotes on the board 1-0 at 3:32 in the opening frame.

Balcers got a hold of a bouncing puck right in front of the net to bury the puck five hole and tie the game 1-1 at 6:44.

There was a second tussle between Viel and Chychrun in the period that led to Viel heading to the dressing room and Arizona going on the power play. Dvorak quickly scored again, putting the Coyotes back on top with 8:24 left in the first.

Karlsson set Labanc up with less than five minutes left in the first period for a sniper shot that eluded Hill and tied the game back up 2-2 all before the first intermission.

Both teams had grade-A chances in the first five minutes of the second period, but Meier was the first to convert with a power move around Arizona’s defense to wrap the puck around Hill and put San Jose on top 3-2 at the 5:26 mark.