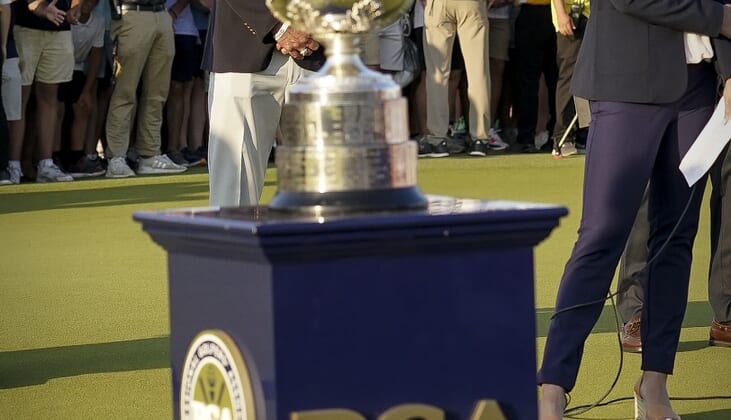 May 23, 2021; Kiawah Island, South Carolina, USA; A view of the Wanamaker Trophy during the final round of the PGA Championship golf tournament. Mandatory Credit: David Yeazell-USA TODAY Sports

The PGA of America and The Trump Organization reached a settlement over the organization’s decision to move the 2022 PGA Championship from the Trump National Golf Club in Bedminster, N.J., the two sides announced Tuesday.

Days after the Jan. 6 insurrection at the U.S. Capitol, PGA of America membership voted to move the tournament to a new host course. At the time, organization president Jim Richerson took issue with the Bedminster location, saying former President Donald Trump incited the violence and gave the organization cause to move the event.

“The Trump Organization’s contribution to the golf community is appreciated,” the PGA said in a statement issued Tuesday. “We are thankful the company employs hundreds of dedicated PGA Professionals and consistently gives back to the golf community through hosting charitable events and sponsoring junior golf programs,” adding The Trump Organization has a portfolio of “some of the finest private and public golf courses anywhere in the world.”

Trump’s son, Eric, who is executive vice president of the family-run company, added his comments in the news release.

“We have great respect for the work of the PGA,” he said. “Over the past 20+ years, we have enjoyed working with the PGA to deliver to our club members and the public some of the greatest golf experiences anywhere in the world. We look forward to continuing to support the mission of the PGA and its Professionals, who are the best in the golf industry.”

Southern Hills Country Club in Tulsa, Okla., was awarded the 2022 PGA Championship on Jan. 25. The tournament is scheduled to take place May 19-22. Phil Mickelson is the defending champion.