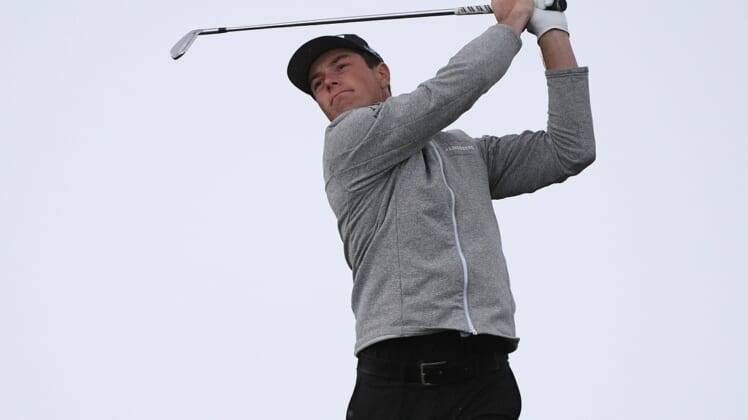 Norway’s Viktor Hovland snatched a one-stroke lead after shooting a 7-under 65 on Friday at the Farmers Insurance Open at cold, rainy Torrey Pines Golf Course in San Diego.

The 23-year-old, who started on the 10th hole of the South Course, recorded five birdies and one bogey in his first nine holes. He added three more birdies on the front nine, sinking a 7-footer on the finishing hole to grab the outright lead at 9-under 135.

“Playing a hard golf course and then playing well, that I think is what gives me the ultimate kind of belief that I played really well today,” said Hovland, who is in position to win for the second time his past three PGA Tour starts. “You just can’t really fake it.

“But it’s another day (Saturday) and we’ve got two more rounds left, so it’s definitely not going to roll over and give anything to you.”

A shot back at 8-under 136 are Tony Finau, Lanto Griffin, Ryan Palmer, Patrick Reed, Spain’s Jon Rahm and Australia’s Adam Scott. Reed, who shared the first-round lead after an 8-under 64 on the North Course on Thursday, shot an even-par 72 on Friday on the South Course.

Hovland won the Mayakoba Golf Classic at Playa del Carmen, Mexico, in December, then tied for third in the DP World Championship at Dubai, United Arab Emirates. He tied for 31st at the Sentry Tournament of Champions in Hawaii earlier this month.

Regarding the weather Friday, Hovland said, “Last couple weeks I’ve been in Oklahoma and it’s been really cold, so I’ve had probably three, four layers on practicing and I think that’s helped me for this week. It got really cold and obviously raining and hail, so being Norwegian, I think that also helps.”

“It was a little tough playing obviously the South Course compared to the North with those conditions, but at the same time we had the scorable course yesterday with still and kind of calm conditions,” Reed said. “It’s one of those days that kind of evened out. Now everyone’s out there on the South the next two days and go out and have a shootout.”

Five-time major champion Phil Mickelson, who lives in the San Diego area, birdied his final two holes to finish 1-under to make the cut on the number at 1-under 143.