Peyton Henry kicks No. 25 Washington to upset of No. 6 Oregon 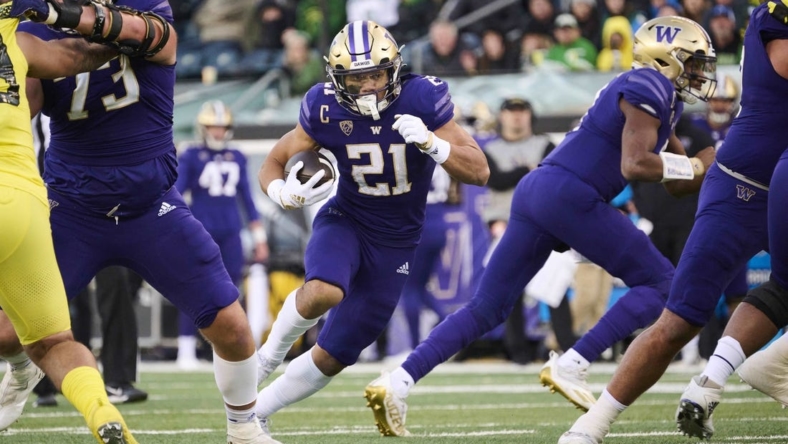 Peyton Henry provided the winning points with a 43-yard field goal as No. 25 Washington upset No. 6 Oregon 37-34 in a back-and-forth game Saturday night in Eugene, Ore.

The Ducks had to play without star quarterback Bo Nix for a couple of minutes late in the game after he was tackled low on a run up the middle and walked slowly off the field favoring what appeared to be a leg injury.

Nix came back with Oregon behind by three to try to lead a game-tying drive, but couldn’t manage to get the Ducks in field goal range.

Down by seven with just over three minutes to play, the Huskies tied the game with Michael Penix Jr.’s pass to Taj Davis that went for 62 yards. Penix lit up Oregon’s defense for 408 passing yards.

The Huskies took a 13-10 lead into halftime after Oregon missed a long field goal attempt to end the second quarter. The third quarter saw both teams combine for five touchdowns, three for Oregon and two for Washington.

The Ducks scored on a 46-yard pass from Nix to Dont’e Thornton, then Washington answered with a short touchdown run from Cameron Davis to re-take the lead.

Oregon running back Noah Whittington gave his team a 24-20 lead with 6:24 to go in the third quarter, running 29 yards off the right side for a touchdown. But Washington struck quickly with Penix’s 76-yard connection with wide receiver Ja’Lynn Polk, who’d run free from his defender in one-on-one coverage.

That didn’t faze the confident Ducks and Nix, who hit Troy Franklin for a 67-yard score and a 31-27 Oregon lead.

Seconds into the fourth quarter, Washington had a first-and-goal from the Oregon 1-yard line. But Penix was chased out of the pocket and instead of throwing the ball away or taking a sack, threw into heavy traffic toward the goal line. Ducks linebacker Noah Sewell tipped the pass, and teammate Jeffrey Bassa intercepted it.

The Ducks took over in the shadow of their own end zone, but marched 91 yards in 20 plays. However, they had to settle for a Camden Lewis field goal with 3:54 to play.