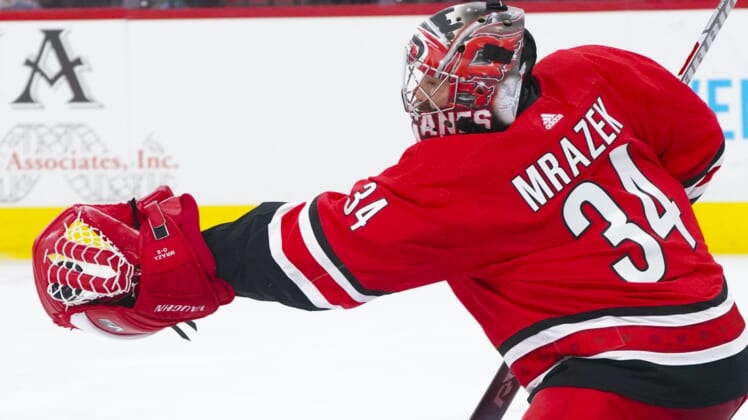 Petr Mrazek made 28 saves in his first game in more than two months as the Carolina Hurricanes topped the visiting Dallas Stars 1-0 on Sunday night in Raleigh, N.C.

Mrazek’s third shutout of the season came against the last team he faced. He played for the first time since suffering a thumb injury Jan. 30 against Dallas.

Jake Oettinger made 37 saves for the Stars. The rookie was coming off a 41-save effort in Saturday night’s 3-2 victory in the same building — a result that gave Dallas back-to-back wins for the first time in more than two months.

Mrazek had two shutouts prior to his injury. At the time, that total was tied for the NHL lead.

He needed 12 saves in the third period to cap this shutout.

Stars coach Rick Bowness didn’t return to the bench for the third due to COVID protocols. The team announced the situation in between the second and third periods. Assistant coach John Stevens took over head coaching responsibilities for the remainder of the game.

Dallas’ injury list grew when center Jason Dickinson was placed on injured reserve with a lower-body ailment. On the plus side, left winger Roope Hintz was back on the ice after a one-game absence.

Vincent Trocheck and Brett Pesce posted assists on Martinook’s goal. His only other goal this season came Feb. 13 at Dallas.

Carolina was in the second game of a season-long eight-game homestand. The Hurricanes improved to 5-1-0 against the Stars this season.