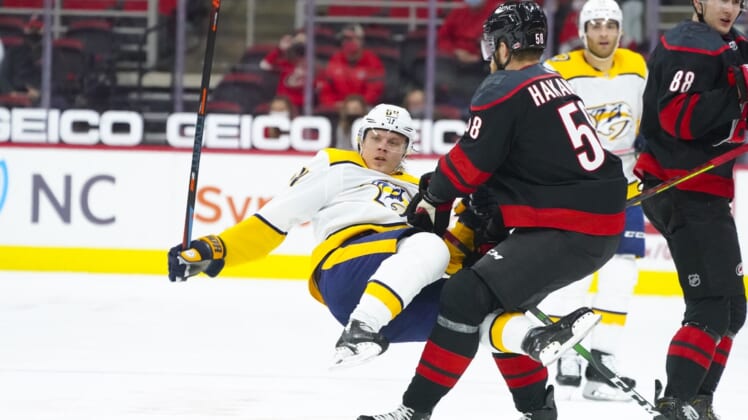 Petr Mrazek needed to make only 19 saves to help the Carolina Hurricanes break a two-game losing streak by defeating the visiting Nashville Predators 4-1 on Thursday night in Raleigh, N.C.

Mrazek is 3-0-1 since returning from a layoff of more than two months because of a thumb injury.

Warren Foegele, Andrei Svechnikov, Vincent Trocheck and Sebastian Aho had the goals for Carolina, which is locked in a tight battle with Tampa Bay and Florida for the top spot in the Central Division. Svechnikov and Trocheck each supplied an assist.

Erik Haula scored a short-handed goal in the third period for the Predators, who had only 12 shots on goal through two periods.

The Predators lost for just the fourth time in their last 17 games.

The Hurricanes, playing in the seventh game of an eight-game homestand, led 3-0 entering the third period.

In what was shaping up as a rather dull opening period, the Hurricanes went ahead with a nifty transition goal, with Foegele finishing near the net off an assist from Jordan Staal. Mrazek started the end-to-end play, picking up a secondary assist. It was Foegele’s first goal of the homestand.

The Hurricanes added another transition goal just 14 seconds into the second period. Svechnikov took a pass from Dougie Hamilton in stride going down the slot and beat Saros for the tally. It was Svechnikov’s first goal in eight games.

Trocheck scored following a Nashville turnover in the neutral zone. He knocked in a rebound off his own shot.

Nashville was on the board with 10:30 remaining in the game when Haula, a former Carolina player, skated in alone and beat Mrazek with a shot.

Aho’s goal clinched the outcome with 2:38 to play on a power play.

It was the Carolina debut for defenseman Jani Hakanpaa, who was acquired earlier in the week from the Anaheim Ducks. He had a plus-1 plus/minus rating in nearly 15 minutes of ice time.