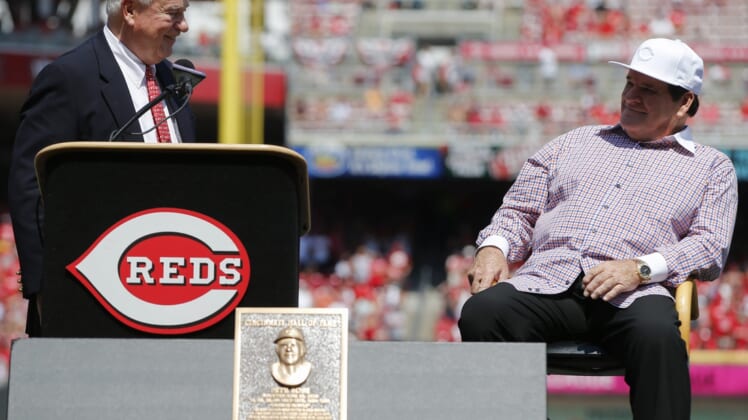 Given Major League Baseball’s embrace of gambling, Pete Rose wants back in.

Banned from baseball in 1989 from gambling on games when he managed the Cincinnati Reds, Rose told USA Today Sports in a lengthy story published Thursday that it’s time for the game to welcome him back.

After all, just Wednesday it was announced that Rockies outfielder Charlie Blackmon signed on as an endorser of MaximBet, an online sportsbook based in Colorado. Blackmon will take part in marketing campaigns and various promotions.

“Baseball is pretty much in bed with gambling now,” Rose said.

It was Rose’s betting on baseball, detailed in the 1989 Dowd Report, that led to Rose receiving the lifetime ban. The Hall of Fame later voted to exclude anyone on the permanently ineligible list from its membership.

That leaves Rose — MLB’s all-time hits leader, 1973 National League MVP, 17-time All-Star and three-time World Series champion — on the outside of the Hall of Fame in Cooperstown, N.Y.

He was inducted into the Cincinnati Reds’ Hall of Fame in 2016 by special permission from MLB.

Rose has applied for reinstatement three times and hopes that he finally will be welcomed back the way MLB has welcomed gambling. Gambling advertising now is accepted, and sportsbooks are planned at three stadiums.

“However, I would wish baseball would just give me an opportunity to be on the (Hall of Fame) ballot. Not, put me in, let the writers decide. I’ve been suspended since ’89, 33 years ago. That’s a long time. And to be honest with you, it probably cost me $100 million.