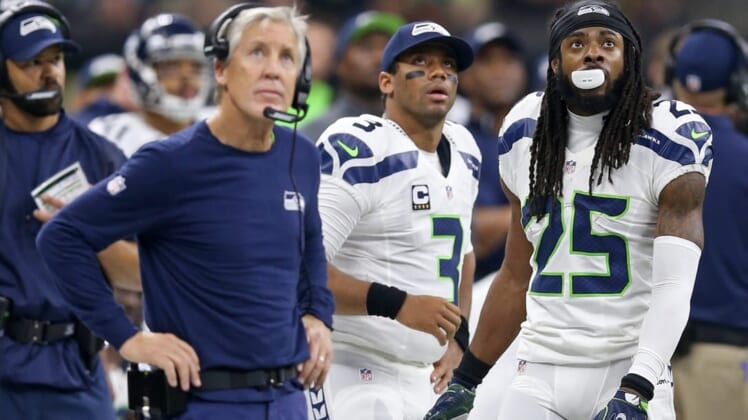 Don’t let the door hit you in the behind on the way out, seems to be the overall message sent to Michael Bennett and Richard Sherman by Seattle Seahawks coach Pete Carroll.

On Monday, Carroll opened up a bit about his departed former stars, one of which was outright released (Sherman) while the other (Bennett) was traded for a ham sandwich to the Philadelphia Eagles.

Initially, Carroll was responding to a question about Bennett, who had reportedly been reading books during team meetings last year because he’s heard everything coach had to say.

Carroll shot that rumor down, saying, “Mike never brought a book to a meeting, I’ll tell you that,” per Gregg Bell of the News Tribune. Then, he elaborated on how things ended between the organization and its former stars.

“The thing I would tell you about that is that we’ve been through a lot around here, we’ve grown tremendously together and all of that, and changes are inevitable,” Carroll said. “Sometimes, guys can’t hang with what’s expected, for one reason or another — their growth, their development and all of that.”

Saying Bennett and Sherma couldn’t “hang with what’s expected” is a pretty harsh shot from what appears to be a coach who got sick and tired of them.

Then, after that harsh dig, Carroll delivered the coup de grâce, saying “And the best thing I can tell you is, that they’re not here.”

That’s pretty much leaving no room for interpretation. Carroll isn’t pulling any punches here, and his comments are definitely a message to his current players, as well.

It’s going to be fascinating to see how Seattle rebounds from what’s been a tumultuous last year or so. The Legion of Boom is no more. The team’s offense is still very much a halfway done jigsaw puzzle that’s missing key pieces. Things could get much more difficult before they get better. Or, just maybe, Carroll will once again find the magical recipe to turn chaos into gold.