Pete Carroll on brutal non-call against 49ers: ‘Yes, that was pass interference’ 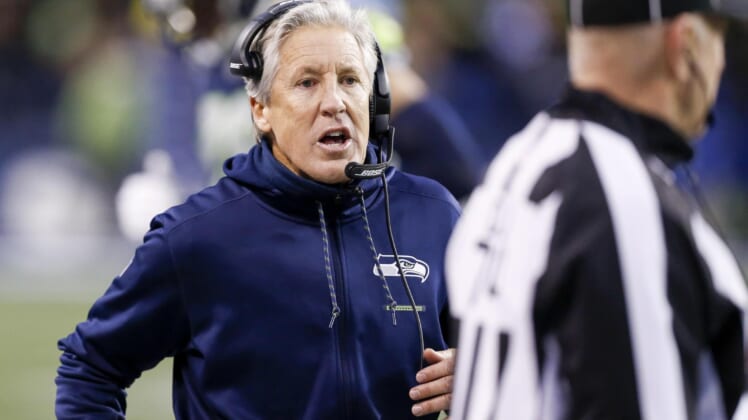 The Seattle Seahawks (and New Orleans Saints) were burned by refs Sunday night when the San Francisco 49ers got away with a blatant pass interference penalty.

The play occurred in the end zone as 49ers linebacker mugged Seahawks tight end Jacob Hollister in the end zone with 15 seconds left in the fourth quarter. The play, which absolutely should have been reviewed by the booth but was not, ultimately denied the Seahawks a chance to try and punch in a touchdown from the one-foot line.

In the end, the Seahawks fell about two inches short of coming back to beat the 49ers. And in the process, the Saints lost out on a first-round bye.

On Monday morning, Seahawks head coach Pete Carroll made his opinion crystal clear on whether a penalty should have been called. He also made it clear he’ll be sharing those thoughts with the NFL.

Quite honestly, that the play wasn’t reviewed or overturned puts the spotlight on just how ridiculous this rule has been in its first year.

The Saints were egregiously brutalized last year in the NFC Championship Game on one of the most blatant pass interference penalties in history that went as a no-call. That prompted the league to allow reviews on pass interference. Only, this year, those reviews have been highly controversial as the league seems hell bent on not overturning the calls on the field.

It’s going to be fascinating to see if the league corrects this during the offseason.