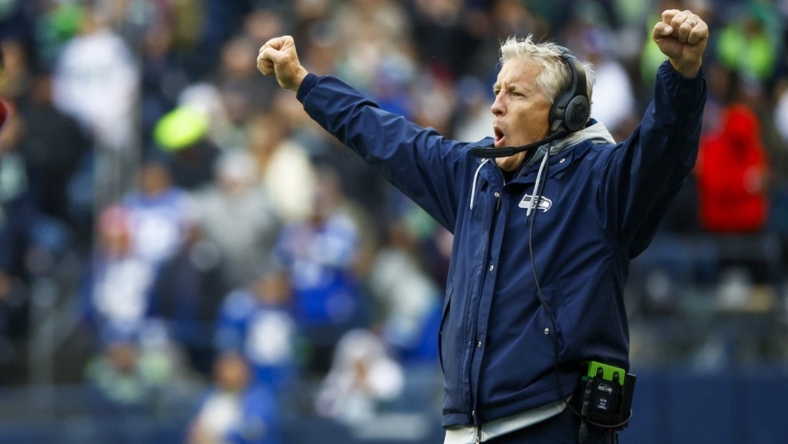 Seattle Seahawks head coach Pete Carroll was asked about this week’s trip to Munich, Germany, to play the Tampa Bay Buccaneers on Sunday as part of the NFL’s International Series.

“To me, it’s like a (college) bowl game,” said Carroll, who guided USC to several, including a Bowl Championship Series title, before returning to the pros over a decade ago. “Everything around it, there is somewhat of a celebration everywhere you go as you travel and at the airport. It just seems like there is an added level of attention to it that makes it fun.”

It will be the first NFL game played at Allianz Arena, the home of the FC Bayern Munich soccer team, and will feature a pair of division leaders.

The surprising Seahawks (6-3) have won four consecutive games to move atop the NFC West, while Tom Brady and the Buccaneers (4-5) are tied for first with Atlanta in the NFC South.

Carroll said his players are excited about the trip.

“They are really pumped up about it,” Carroll said. “We are going to try and put on a show, make them see our football, and experience it in a way they never have before. It’s an honor to do that, and we will respect the heck out of every aspect of this.”

This will be the Seahawks’ second European trip in four years — they defeated the then-Oakland Raiders 27-3 in London in 2018 — so they have a feel for what’s ahead.

“Really, we are going to get on the bus, get on the plane, we will sleep a little bit longer, and we will be in a different country,” Carroll said. “It’s really not that big of a deal.”

The Seahawks won 31-21 at Arizona last week as Geno Smith shook off a pick-six to throw for 275 yards and two touchdowns while rookie Kenneth Walker III rushed for 109 and two more scores.

The Buccaneers, meanwhile, had to rally to defeat the defending Super Bowl champion Los Angeles Rams 16-13 at home to end a three-game skid. Brady completed 5 of 6 passes for 60 yards on the winning drive, the record 55th of his career, and hit rookie tight end Cade Otton with a 1-yard touchdown pass with nine seconds remaining.

“We have not played the way we’re capable. Just some things have kind of not really fallen our way at all,” said Brady, who became the first NFL quarterback to throw for more than 100,000 career yards, including regular season and playoffs. “Hopefully we can get a win (Sunday), get to 5-5 and then the whole season is ahead of us.”

Added Buccaneers coach Todd Bowles: “It’s a lot easier to fly overseas after you win a game than when you lose a game. We’ve just got to start putting (victories) together.”

Brady’s options might be diminished Sunday as several of his receivers were listed on the injury report this week. Wideouts Julio Jones (knee) and Russell Gage (hamstring) have missed practice, while Mike Evans (ribs/ankle) has been a limited participant. Guards Shaq Mason (ankle) and Luke Goedeke (foot) have also sat out, as has linebacker J.J. Russell (hamstring).

The Seahawks are relatively healthy, with nose tackle Al Woods and defensive end Poona Ford both missing practice because of illnesses and linebacker Cullen Gillaspia sidelined with a knee injury.