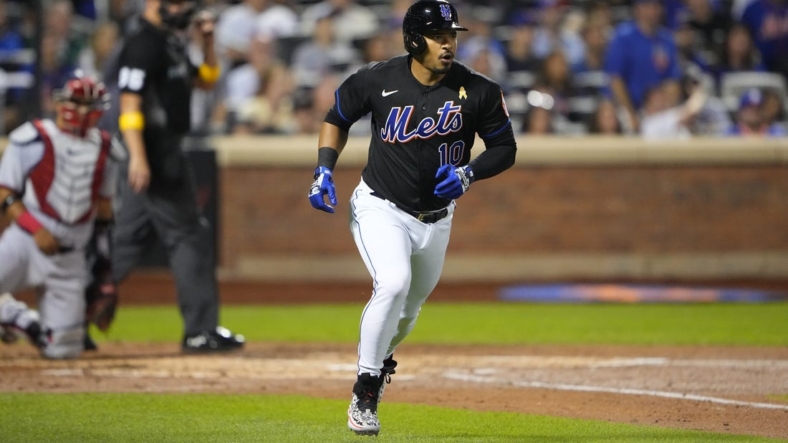 Pete Alonso’s leadoff homer in the sixth inning snapped a tie and sparked a four-run outburst for the host New York Mets, who went on to beat the Washington Nationals, 7-3.

The National League East-leading Mets, who entered Friday with a three-game lead over the Atlanta Braves, have won three straight and six of eight. The last-place Nationals had their two-game winning streak snapped.

Alonso homered to left against Josiah Gray (7-9), who then walked Daniel Vogelbach and gave up a single to Jeff McNeil before being pulled for Steve Cishek. After Mark Canha singled to load the bases, Eduardo Escobar lofted a sacrifice fly and Tomas Nido hit an RBI single before Brandon Nimmo laced a run-scoring triple.

Escobar hit a two-run homer in the second and Nido delivered a sacrifice fly in the fourth for the Mets. McNeil finished with three hits while Nimmo and Mark Canha had two hits.

Mychal Givens (7-3), the first of three relievers to follow David Peterson, tossed 1 2/3 hitless innings. Peterson allowed three runs on eight hits and one walk while striking out six over 5 1/3 innings.

Luke Voit had three hits for the Nationals. Ildemaro Vargas had two hits, including a game-tying RBI double in the sixth, while Luis Garcia also collected two hits.

The Mets went ahead in the second, when McNeil hit a leadoff single and scored on Escobar’s one-out homer.

The Nationals cut the gap in half in the third. Victor Robles opened the inning with a triple and scored when Nido’s one-out pickoff throw sailed beyond Escobar.

Nido redeemed himself with a sacrifice fly in the fourth, when Vogelbach drew a leadoff walk and went to third on McNeil’s double before scoring on Nido’s fly out to center.