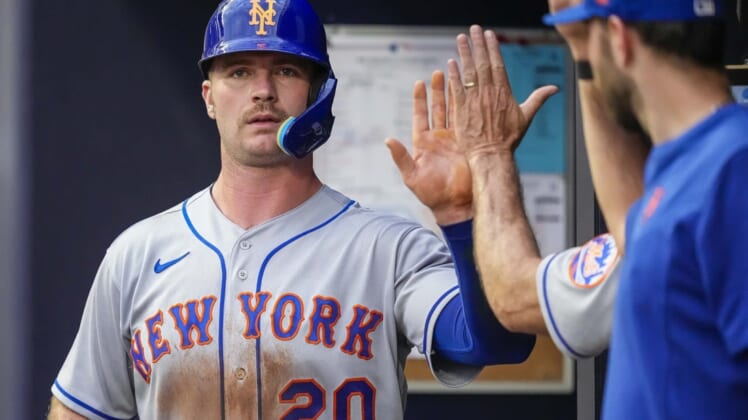 Pete Alonso avoided one major threat when Shohei Ohtani reportedly declined an invite into the Home Run Derby, but the two-time defending champion is still not favored to complete the three-peat.

Shortly after Texas’ Corey Seager accepted the eighth and final spot on Thursday, SportsBetting.ag installed Philadelphia’s Kyle Schwarber as the +350 favorite to win Monday’s contest. Schwarber was named the No. 1 seed as he will make his second Derby appearance and entered Thursday leading the National League with 28 home runs.

Schwarber will open this year’s competition against Albert Pujols, the future Hall of Famer who carries +1400 odds — far longer than anyone else.

Schwarber is a slight favorite over Alonso, the No. 2 seed who is attempting to join Ken Griffey Jr. as the only players to win the Derby three times. He’ll also be looking to top his single-round high of 35 homers hit in the first round last year.

Alonso’s consecutive titles are why Acuna enters with +650 odds despite leading the majors in average homer distance this season. He would have to get past Alonso in the opening round.

Seager steps in as the No. 3 seed after being added to the All-Star Game as an injury replacement for Toronto center fielder George Springer. The long-time Dodger played his first seven seasons in Los Angeles and has hit 59 of his 125 career home runs at Dodger Stadium.

Seager will square off against a division rival, Seattle’s Julio Rodriguez. The Mariners outfielder the first rookie to participate in the Derby since Alonso and Vladimir Guerrero Jr. in 2019.

The final pairing pits No. 4 seed Juan Soto against No. 5 seed Jose Ramirez.

Soto upset Ohtani in an epic first-round battle that went to a swing-off in his debut last year. Ramirez will be participating for the first time after hitting 36 home runs last year. He entered Thursday with 17 homers this year and an American League-leading 68 RBIs.