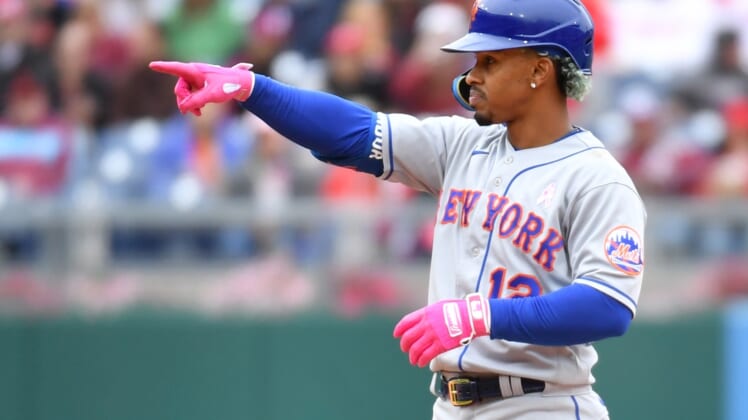 Pete Alonso hit two home runs with a single and drove in five runs as the New York Mets salvaged a doubleheader split with a 6-1 victory over the host Philadelphia Phillies on Sunday.

The Phillies captured the doubleheader opener 3-2.

Tomas Nido added two hits for the Mets, while starter Chris Bassitt (4-2) gave up five hits and one run in 5 2/3 innings with one walk and four strikeouts.

Jean Segura hit a home run with a single and a walk for the Phillies. Philadelphia managed only six hits, four of them singles.

Phillies starter Christopher Sanchez tossed only 2 1/3 innings and allowed two hits and two runs with two strikeouts and one walk. Sanchez (0-1) was an emergency starter after Zach Eflin was placed on the COVID-19 injured list.

Alonso launched a two-run home run to left field for a 2-0 Mets lead in the first inning. The Phillies closed within 2-1 in second inning when Segura lined a solo homer to right, the 100th of his career.

The Mets placed runners at first and second with one out in the fifth before Francisco Lindor popped out to second. Alonso then responded with a mammoth 426-foot three-run homer off Nick Nelson to left for a 5-1 lead.

New York went ahead 6-1 in the sixth when J.D. Davis scored from third on a wild pitch by Andrew Bellatti.

Philadelphia’s Rhys Hoskins doubled with two outs in the sixth and Segura walked. Bassitt was replaced with Chasen Shreve who struck out Bryson Stott to end the threat.

The Mets loaded the bases without a hit in the seventh yet failed to score.

In the ninth, Hoskins lined out to shortstop and Segura followed with a single. Stott grounded into a fielder’s choice and reached second on defensive indifference. Garrett Stubbs struck out looking to end the game.