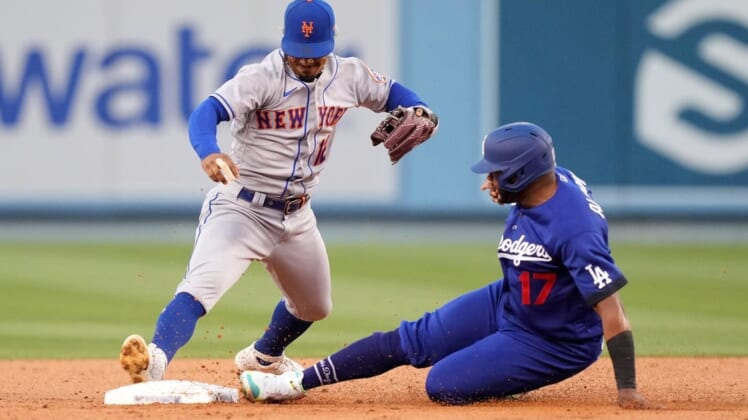 Pete Alonso hit two homers and drove in five runs as the New York Mets got their first win of a 10-game road trip when they defeated the Los Angeles Dodgers 9-4 on Saturday.

Francisco Lindor and Eduardo Escobar also hit home runs as the Mets won after dropping the first two games of the series, with the finale set for Sunday. The all-California trip, which started Thursday, moves to San Diego on Monday.

Mookie Betts had a three-run double for the Dodgers, while starter Walker Buehler struggled to find consistency once again, recording just seven outs and giving up two of the Mets’ four home runs.

Trea Turner went 0-for-4 to see his 26-game hitting streak come to an end, and the Dodgers dropped to 2-4 on their seven-game homestand.

Lindor helped the Mets get a jump on things in the first inning with a home run off a Buehler curveball for a 1-0 Mets lead. The blast capped a nine-pitch at-bat.

The Dodgers evened the score in the second inning on a Cody Bellinger fielder’s choice to score Justin Turner. After Los Angeles loaded the bases later in the inning, Betts cleared them with a double to center field for a 4-1 lead.

It was all Mets from there, starting in the third inning. A Starling Marte RBI double and a run-scoring ground out from Lindor got New York within a run. Alonso gave New York a 5-4 lead in on a two-run home run to left.

In the fourth inning, Escobar hit his fourth home run of the season, while Alonso struck again in the seventh with a three-run shot, his 16th.

Six more Mets pitchers held the Dodgers scoreless the rest of the way, with Colin Holderman (3-0) earning the win by recording one out in the fourth inning.

The Dodgers tried to use infielder Zach McKinstry to pitch the ninth inning in a five-run game, but the move was not allowed because of a 2020 rule that a position player can only pitch in a game with a minimum seven-run difference.