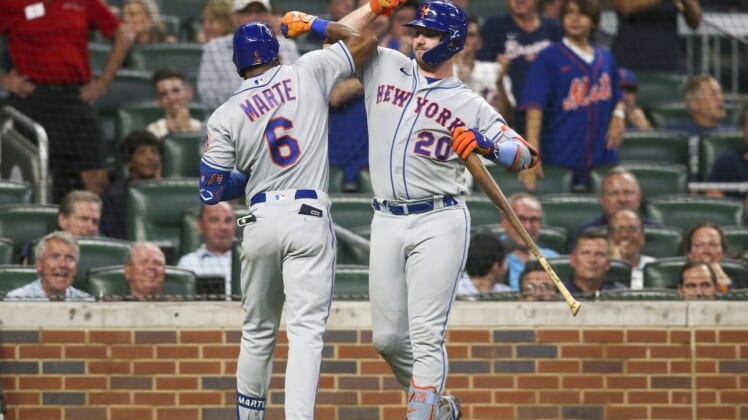 The visiting New York Mets will look to continue their dominance of their National League East rival Philadelphia Phillies on Saturday in a day-night doubleheader.

After a 7-2 win on Friday, the Mets improved to 12-4 against the Phillies this season.

Pete Alonso hit a home run, his 30th, and a double while driving in three runs in the opener of a four-game series. The All-Star first baseman has a .339 average (19-for-56), six homers and 22 RBIs in 16 games against the Phillies this season.

“I feel like it sets the tone for the rest of the weekend,” Alonso said in a postgame interview on SportsNet New York. “We’ve got a really long one tomorrow. This is a really good one and hopefully we can keep the momentum up for Game 1 tomorrow.”

“You look up there and see 100 (RBIs) next to his name in the middle of August, it’s impressive,” Mets manager Buck Showalter said of Alonso. “He and Francisco, they’re just an honor to watch play every day.”

Alonso increased his RBI total to 102.

“He’s handled himself as such a professional,” Showalter said of Alonso. “He holds himself to such a high standard and wants to be everything for us every single night.”

The Mets are expected to start Trevor Williams and David Peterson in the doubleheader.

Over his career, Williams is 0-2 with a 5.95 ERA in five games (three starts) against the Phillies. He threw two scoreless innings in a relief outing vs. Philadelphia on Sunday.

Peterson (6-2, 3.30 ERA) is 1-1 with a 4.67 ERA in six career games, including five starts, against the Phillies. He faced Philadelphia in his season debut, throwing four scoreless innings in a no-decision on April 11.

The Phillies have lost two in a row and four of six entering the doubleheader. They were shut out 1-0 by the Cincinnati Reds on Wednesday in their last game before the Mets series, and they have been held homerless in eight of their past nine games.

“I think that happens to every club,” Phillies interim manager Rob Thomson said. “We haven’t hit many home runs. But that can change in a heartbeat.”

Kyle Schwarber returned to the starting lineup on Friday after recovering from a strained calf and had two hits and two RBIs. J.T. Realmuto contributed three hits, but the Phillies finished 2-for-7 with runners in scoring position with nine runners left on base.

Philadelphia will hand the ball to ace Zack Wheeler (11-6, 2.92 ERA) in the Saturday opener. Wheeler struggled in his latest start, also against the Mets, when he allowed nine hits and six runs in six innings on Sunday.

“Wheels is always tough after a loss,” Thomson said. “He’ll come back guns-a-blazing.”

Phillies left-hander Bailey Falter (0-3, 4.85 ERA) is scheduled to be recalled from the minors to start the nightcap.

Falter is 0-1 with a 5.40 ERA in two career games, including one start, against the Mets. Both outings occurred this season, and Falter gave up six runs, three earned, in five innings.