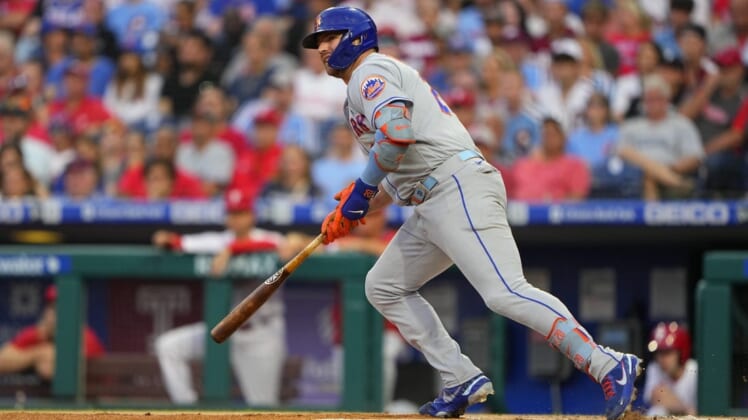 Pete Alonso homered, doubled and drove in three runs, Brett Baty added a two-run single and the New York Mets defeated the host Philadelphia Phillies 7-2 on Friday in the opener of a four-game series.

Francisco Lindor contributed three hits and Starling Marte had two hits for the Mets, who had lost three of four games to the Atlanta Braves to start the week.

After struggling with a strained right calf, Kyle Schwarber returned to the starting lineup and led the Phillies with two singles and two RBIs.

J.T. Realmuto also had three hits for Philadelphia, which took its fourth loss in six games.

Phillies starter Aaron Nola (8-10) allowed eight hits and five runs to go along with nine strikeouts and one walk in five innings.

The Mets went ahead 1-0 in the first inning on an RBI fielder’s-choice grounder from Alonso. Brandon Nimmo scored when Alec Bohm committed a throwing error to second base.

In the third, Alonso launched a two-run homer to left for a 3-0 lead. It was Alonso’s 30th home run of the season. Jeff McNeil added an RBI single in the inning for a four-run advantage.

The Phillies had just one hit through the first three innings, a second-inning triple by Bryson Stott.

Realmuto doubled with one out in the fourth and moved to third when Nick Castellanos extended his hitting streak to eight games with an infield single. Stott struck out and Jean Segura flied out to right to end the threat.

The Mets took a 5-0 lead in the fifth when they executed a double steal as Lindor swiped second and Marte scampered home.

Schwarber hit a two-run single in the bottom of the fifth to pull the Phillies within 5-2.

The Mets tacked on two more runs in the seventh when Baty hit a two-run single with two outs off Andrew Bellatti.