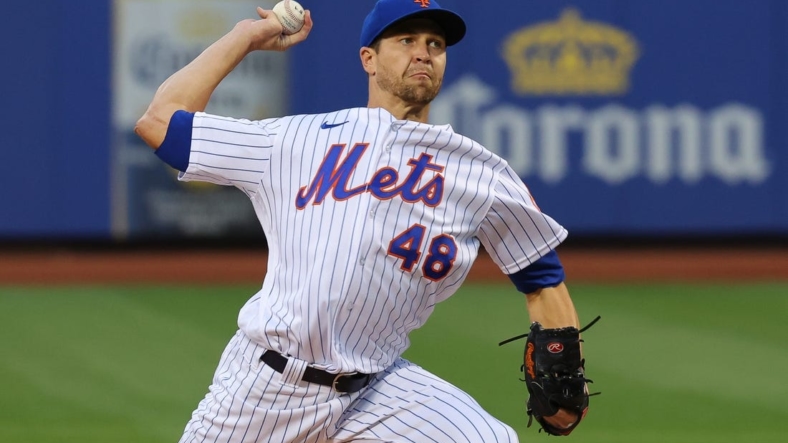 Pete Alonso hit a three-run homer and Jacob deGrom tossed six strong innings Thursday night for the host New York Mets, who beat the Colorado Rockies 3-1 in the opener of a four-game series.

The Mets snapped a two-game losing streak. Ryan McMahon homered in the sixth for the Rockies, who have lost eight of 11.

A two-time NL Cy Young Award winner, deGrom (3-1) allowed one run on three hits and walked one while striking out nine. He didn’t allow a baserunner until the fifth, when Jose Iglesias and Randal Grichuk singled and doubled, respectively, with one out.

He escaped the jam by whiffing Sam Hilliard and retiring Brian Serven on a fly out.

He allowed two more baserunners in the sixth, when McMahon homered and Brendan Rodgers drew a walk with one out. After striking out Charlie Blackmon, deGrom then got C.J. Cron to hit into a fielder’s choice.

Seth Lugo allowed two singles and a walk but struck out McMahon to end the seventh. Edwin Diaz tossed a hitless eighth before Adam Ottavino earned his first save with a 1-2-3 ninth in which he struck out one.

The Mets scored all their runs in the third, when Tomas Nido and Brandon Nimmo led off with singles against Ryan Feltner (2-5). Nido went to third when Nimmo was forced on a comebacker by Starling Marte and scored on a groundout by Francisco Lindor.

Alonso followed with a homer well into the left field seats. It was just the second homer in the last 21 games for Alonso, who is tied for third in the National League in round-trippers.

Alonso and Tyler Naquin had two hits apiece for the Mets while Nimmo drew two walks. Iglesias and Grichuk had two hits each.