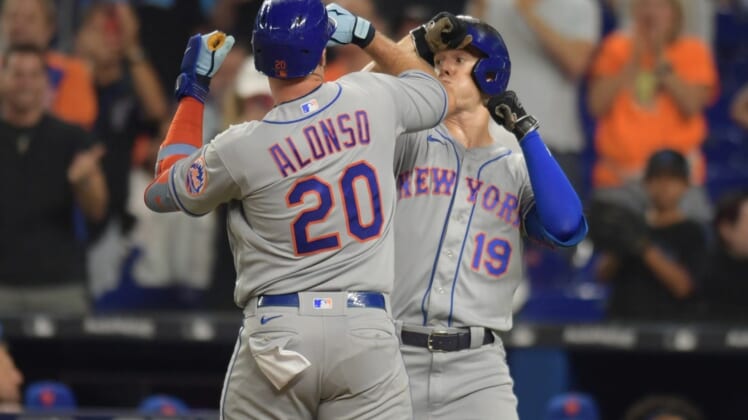 It was Alonso’s 14th career multi-homer game. He has 22 homers this season, and he leads the majors with 68 RBIs.

New York’s Brandon Nimmo went 3-for-5 with a run-scoring double in the ninth.

Edwin Diaz struck out the side — all swinging — in a 1-2-3 ninth for his 16th save of the year and his second in two days.

Miami’s Trevor Rogers escaped with a no-decision, allowing three runs, seven hits and one walk in 4 1/3 innings. He struck out five.

New York opened the scoring in the second inning on Alonso’s 346-foot opposite-field homer to right.

The Mets stretched their lead to 3-0 in the fourth on a rally that started with Starling Marte’s single. Francisco Lindor’s brilliant dive into second gave him a double on a play where it looked like he was going to be the first out of the inning. Mark Canha then hit an RBI groundout, and Eduardo Escobar snapped a 3-for-36 slump with a run-scoring single.

Miami closed its deficit to 3-2 in the bottom of the fourth on Sanchez’s 381-foot homer that was pulled to right. That could’ve been a three-run blast, but, on the previous play, Garrett Cooper was thrown out trying to go from first to third on Jesus Aguilar’s bloop single. Cooper was nailed by Marte’s strong on-the-fly throw from right.

The Mets got three straight singles in the fifth, loading the bases with one out and knocking Rogers out of the game. However, reliever Zach Pop got Alonso on a pop fly before striking out Canha.

Miami tied the score 3-3 in the bottom of the fifth when De La Cruz rocketed a line drive 370 feet off the left-field pole.

Alonso’s second homer — this one measured at a massive 433 feet — gave the Mets a 4-3 lead in the eighth.

James McCann, who played his first game since fracturing his left wrist on May 17, singled in the ninth and scored from first on Nimmo’s double to the wall in right-center.