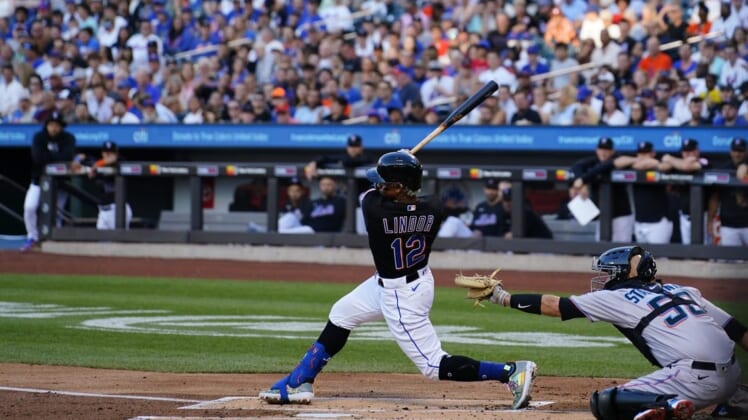 Lindor’s three-run homer, his 10th homer of the season, put the Mets ahead 3-0 against Pablo Lopez (4-3) in the first inning.

Alonso’s slam, a line shot that just cleared the fence in left, was his 19th long ball. The blast capped a seven-run sixth inning that sealed the Mets’ fourth win in the past five games. Alonso leads the National League with 63 RBI.

Lopez permitted eight hits and seven runs, six earned, in 5 1/3 innings. He fanned five and walked one as Miami lost for the fourth time in five games.

In the New York first, Brandon Nimmo led off with a grounder off the glove of sliding second baseman Jazz Chisholm Jr. It was a tough but makeable play that was scored a single. Starling Marte then sent a fly ball to center, and Bryan De La Cruz dropped it for his third error of the season.

That brought up Lindor, who had been mired in an 8-for-49 (.163) slump since fracturing the middle finger on his right hand when he slammed it in between double doors in a hotel earlier this month. He smacked an 0-1 pitch to straightaway center for a three-run homer.

De La Cruz, leading off the fifth, got back the run he gave away on his first-inning miscue when he drove a 3-2 pitch into the left field seats for a solo homer, his third. That trimmed New York’s lead to 3-1.

The Mets put the game away in the sixth, despite a bizarre play involving De La Cruz. With no outs and runners on first and second, Luis Guillorme sent a deep fly to the center field wall. De La Cruz trapped it against the wall and it was called an out, eventually resulting in an apparent double play.

However, the call was overturned on replay, and it was ruled the bases were loaded. J.D. Davis hit an RBI single off Lopez for a 4-1 lead. With two outs, reliever Tommy Nance walked Marte and hit Lindor with a pitch, forcing in two runs, and then served up Alonso’s slam.

New York manager Buck Showalter said before the game that second baseman Eduardo Escobar (dizziness, vision issues), who sat out a second straight game, would play Saturday. Escobar was in uniform and in the dugout.