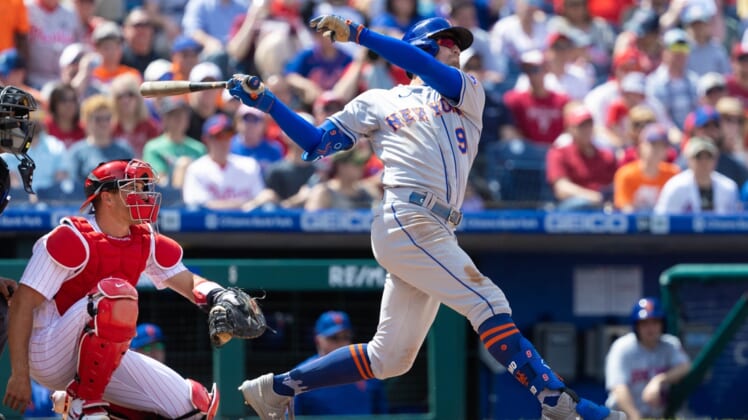 Pete Alonso hit a three-run homer and finished with five RBIs Wednesday afternoon for the visiting New York Mets, who raced out to a big lead before hanging on to beat the Philadelphia Phillies 9-6 in the rubber game of a three-game series.

The Mets finished 5-2 on a season-opening road trip. The Phillies went 3-3 on their first homestand.

Alonso did his damage in three consecutive innings by delivering RBI doubles in the fourth and fifth innings before his homer capped a four-run sixth. In two starts as the Mets’ designated hitter this season, Alonso has two homers and nine RBIs.

Brandon Nimmo’s second solo homer in as many games gave the Mets a 1-0 lead in the third. Jeff McNeil drew a bases loaded hit by pitch in the fourth, Starling Marte (2-for-5) had an RBI single in the sixth and Dominic Smith lofted a sacrifice fly in the ninth.

The homer by Alonso extended the Mets’ lead to 8-1 before the Phillies inched back. Philadelphia loaded the bases against Sean Reid-Foley in the sixth before Bryson Stott and Matt Vierling delivered run-scoring groundouts.

Joely Rodriguez struck out Kyle Schwarber to end the sixth but opened the seventh by issuing back-to-back walks to J.T. Realmuto and Bryce Harper. Nick Castellanos greeted Adam Ottavino with an RBI double and Alec Bohm followed with a sacrifice fly.

Seth Lugo threw a perfect eighth inning and Harper homered off Edwin Diaz in a non-save situation in the ninth.

Max Scherzer (2-0) earned the win for the Mets after allowing one run on five hits and three walks while striking out seven over five innings.

Castellanos, Stott and Johan Camargo all had two hits apiece for the Phillies.

Aaron Nola (1-1) took the loss after giving up three runs on three hits and three walks while striking out five over 3 1/3 innings.