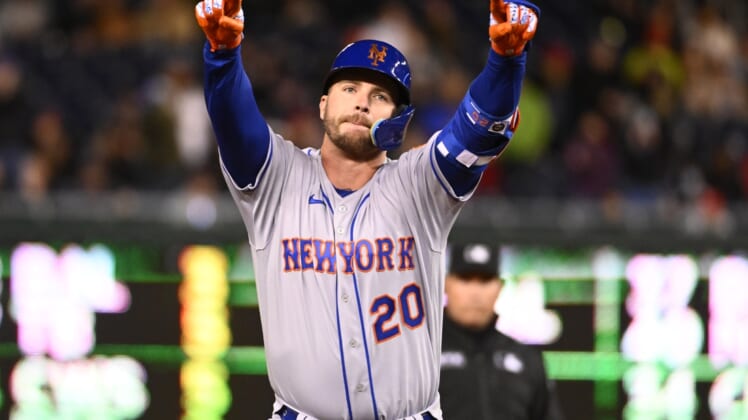 Pete Alonso hit a grand slam for his first home run of the season, Chris Bassitt tossed six innings in his Mets debut and visiting New York shut out the Washington Nationals 5-0 on Saturday.

Bassitt (1-0), acquired in a March trade with the Oakland Athletics, allowed three hits, walked one and struck out eight in his first career appearance against the Nationals.

Travis Jankowski and Brandon Nimmo each had two hits and a walk for New York, which is 3-0 for the first time since they started 4-0 in 2012.

Mets shortstop Francisco Lindor, who left the Friday game after being hit in the face with a pitch, was in the lineup and went 1-for-3 with two walks.

Four Mets pitchers combined for 12 strikeouts while allowing four hits and a walk.

Juan Soto had two hits for the Nationals, who are off to their worst start since they lost the first seven games in 2009. Joan Adon (0-1), in his second major league start, gave up four runs on four hits and four walks in 4 1/3 innings. He struck out three.

Josh Bell batted against Bassitt with runners on first and second with one out in the first but grounded into a double play.

Soto singled leading off the fourth and Bell drew a one-out walk, but Bassitt struck out Lane Thomas and got Maikel Franco to fly out.

The Mets took the lead in the fifth. James McCann lined a single to left and Nimmo walked. Starling Marte flied out, but a wild pitch from Adon moved the runners to second and third. After Lindor walked, Alonso skied a 2-1 fastball to left that landed several rows into the seats for his first career grand slam.

In the eighth inning, Washington reliever Mason Thompson was visited by manager Dave Martinez and the trainer after throwing three pitches, and the right-hander exited the game.

The Mets added a run in the ninth when Nimmo doubled off the glove of third baseman Franco and later scored on an Andres Machado wild pitch.