Penn State storms back to take down Northwestern 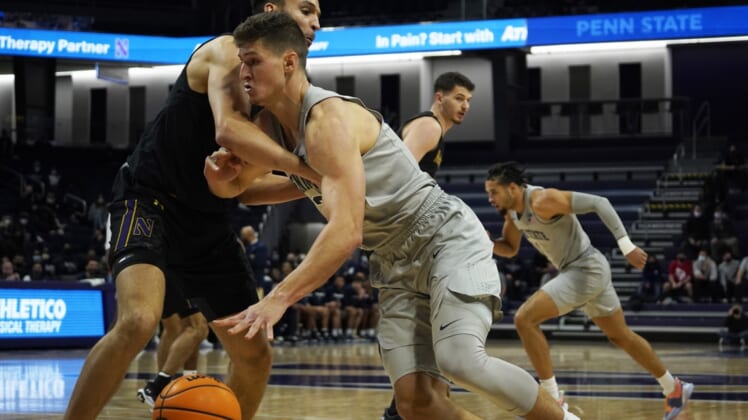 Seth Lundy scored 15 of his game-high 23 points after halftime, including a go-ahead 3-pointer with 36 seconds to play, as visiting Penn State overcame a 10-point second-half deficit to defeat Northwestern 74-70 on Wednesday night in Chicago.

Lundy’s heroics boosted the Nittany Lions in the closing moments. His three-point play with 16 seconds to go provided a 71-65 edge. Northwestern pulled to within three on a Pete Nance trey with four seconds to go and had a chance at a tying 3-pointer with Chase Audige stole the ensuing inbounds pass. But the shot was off the mark.

Boo Buie scored 22 points for the Wildcats while swishing five of the team’s 12 treys. Nance (15 points) and Robbie Beran (11) followed in double figures.

Lundy converted a four-point play with 2:25 remaining to give Penn State a 63-61 lead. Nance hit a tying layup the next time down the floor but was unable to help the Wildcats regain the advantage, missing a free throw with 1:20 left.

Jalen Pickett scored 18 points for Penn State. John Harrar had nine points and eight rebounds as the Nittany Lions claimed the battle on the glass 40-28

The Nittany Lions shot 45.5 percent from the floor compared to 42.6 percent for the Wildcats. Four Wildcats made at least two 3-pointers.

Northwestern led by as many as 10 points midway through the second half and led for more than 33 minutes overall, but Penn State responded while capitalizing on a Wildcats scoring drought of 4:25.

Northwestern led 34-29 at halftime behind 7-for-15 shooting from long range. Buie, Nance and Beran each hit a pair of 3-pointers before the break.