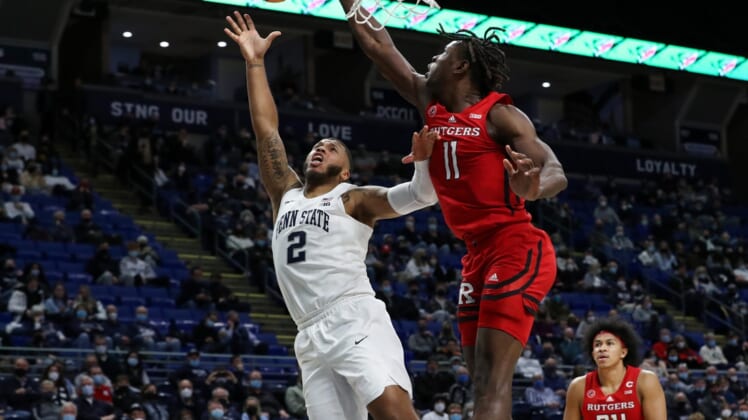 Cliff Omoruyi scored 12 points, pulled down 12 rebounds and was the only double-figure scorer for Rutgers (9-6, 3-2), which dropped to 0-5 on the road this season. Leading scorer Ron Harper Jr., who was averaging 16.3 points per game, was limited to seven on 2-for-9 shooting.

Penn State led 27-19 at halftime and by nine early in the second half. Harper, who had been held to one basket until that point, drained a 3-pointer from the left side with 11:45 left in the game to cut Rutgers’ deficit to 35-31.

Penn State’s Seth Lundy (10 points) and Sessoms answered with back-to-back 3-pointers, and Harrar scored inside on a put-back to put the Nittany Lions in front 43-31 with 10:06 left.

Harper’s steal and pass to Geo Baker for a trey plus a second-chance basket by Omoruyi brought Rutgers within 43-36. However, Sessoms made a pass to Harrar for an easy basket, and shots by Lee and Jevonnie Scott increased Penn State’s advantage to 49-36 with 7:05 to go. Rutgers didn’t get closer than 10 after that.

Penn State never trailed, and the game was last tied at 4. Back-to-back 3-pointers by Sessoms and Pickett increased the Nittany Lions’ lead to 18-6 with 10:25 left in the first half.

After Jalen Miller made a basket in the paint for the visitors, Lundy’s trey from the left corner gave the Nittany Lions a 21-8 lead.

The Scarlet Knights responded by going on an extended 11-2 run to trim the Nittany Lions’ lead to 23-19 on Oskar Palmquist’s 3-pointer from the right side with 2:05 left in the half. But a jumper by Pickett and a contested drive by Sessoms enabled Penn State to take a 27-19 lead into intermission.