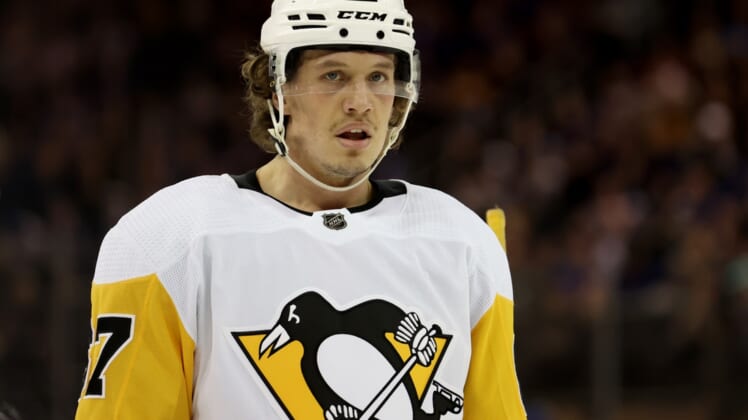 After getting thoroughly outclassed by the New York Rangers on Friday, the Pittsburgh Penguins carried the sting through their Saturday workout and hope to flush it before they host the Detroit Red Wings on Sunday.

The Penguins were still talking about that game Saturday after a short, workmanlike practice that started late because meetings and video sessions ran long following the no-show in New York.

“I’m stating the obvious when I say we didn’t have our best,” Pittsburgh coach Mike Sullivan said. “I think our players are well aware of that. I think it’s important that we learn from the experience. That was a hard one. There needs to be some takeaways”

Penguins captain Sidney Crosby, clearly agitated, warned that his team has “got to make sure that we don’t have an effort like that for the rest of the year. That’s something that we just can’t accept.”

Pittsburgh played that game without center Evgeni Malkin, a late scratch because of a non-COVID illness. Malkin did not practice Saturday. His status for Sunday, Sullivan said, will be determined by how he feels, prompting the team to issue an emergency recall for Kasper Bjorkqvist from the AHL as insurance.

Detroit has been dealing with a longer list of injured players, including goaltender Thomas Greiss, who is out this weekend because of an upper-body issue, and defenseman Marc Staal, who is questionable because of an undisclosed injury.

Since a six-game losing streak (0-5-1) earlier this month, the Red Wings are 2-2-1, including Saturday’s 2-1 overtime loss at home to the Tampa Bay Lightning.

Five games below .500 and the playoffs barely a mathematical possibility, the Red Wings have been taking a look at a slew of young players.

“We’ve got a lot of guys that are trying to prove they can help this team and this organization start winning on a more regular basis,” Blashill said. “Through the early part of the year, we hovered around .500 and kept ourselves in the mix. And then we’ve fallen off that.

“So now you’ve got … some young guys needed in more prime roles. So, are you going to help us win, or are you just going to go out and play? There’s a huge difference.”

“We’re young, so we have to learn,” he said, “and now is the time to learn so (a tough season) doesn’t happen next year.”