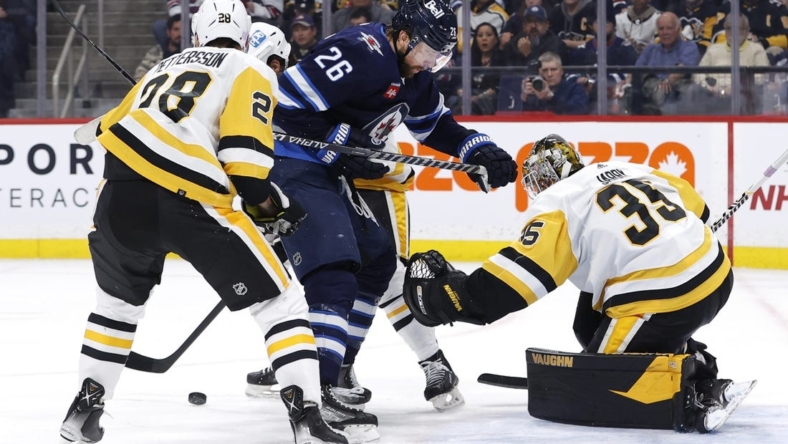 Jason Zucker scored 53 seconds into the third period and Tristan Jarry made 32 saves to lift the visiting Pittsburgh Penguins to a 3-0 victory over the Winnipeg Jets on Saturday.

Bryan Rust collected a goal and an assist late in the third period, and Jake Guentzel added his team-leading 10th goal for the Penguins, who improved to 2-0-0 on their three-game road trip and 4-1-1 in their last six contests.

The modest offense proved just enough for Jarry, who turned aside all nine shots he faced in the third period to secure his first shutout of the season and 12th career. He has stopped 116 of 121 shots to improve to 4-0-0 in his career versus Winnipeg.

Connor Hellebuyck finished with 29 saves for the Jets, who fell to 8-2-1 in their last 11 games overall and saw their five-game home winning streak come to a halt. Hellebuyck has dropped to 3-5-3 in his career versus Pittsburgh.

Prior to the game, Winnipeg coach Rick Bowness announced forward Nikolaj Ehlers will have surgery to repair a sports hernia next week and is out indefinitely.

The Jets outshot the Penguins by a 23-22 margin over the first two periods, but Pittsburgh finally dented the scoresheet early in the third.

Petry’s feed off the right-wing boards caromed to Malkin, who quickly exchanged passes with Zucker just after they entered the offensive zone. Zucker then wired a one-timer that beat Hellebuyck high on the short side for his fifth goal of the season and fourth in his last eight games.

Crosby stole the puck from Hellebuyck and set up Rust’s fifth goal of the season with 1:34 remaining in the third period.

Guentzel scored into an empty net to seal the win.

Jarry kept the game scoreless midway through the first period after he denied defenseman Josh Morrissey’s one-timer from the right dot. Morrissey entered the contest on a six-game point streak (one goal, seven assists).